Intelligent, warm, touching and above all original, You Ain’t Seen Nothing Yet is one of the richest experiences you could ever possibly hope to have in a movie theatre. Do not miss it.

From  Alain Resnais, the 90 year old French film maker who over half a century ago helped re-define our sense of what the cinema could be as one of the earliest contributors to the French New Wave (with such form-challenging classics as Hiroshima mon amour and Last Year At Marienbad), comes a new masterpiece of world cinema, and a true milestone in the possibilities of what film as an art can achieve.

The story of the film concerns a recently deceased playwright gathering together the various actors who have appeared in the two productions of his play ‘Eurydice’ to watch a proposal from an acting group, that’s shot on video, and decide if they are worthy of performing his work. As they watch the presentation in the playwrights abandoned mansion, they become taken with their memories of their own performances of his work and spontaneously start performing it amongst themselves and film shifts joyously between the actors watching the video presentation, the video presentation and the actors own performance on an imagined stage. 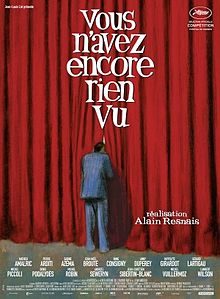 The film is breathtakingly directed by Resnais. He challenges the forms of performance art and cinema at every turn to create a truly magical experience. He weaves effortlessly between the techniques and constructs of stage play, silent film, traditional cinema and digital video, combining it all in one highly ambitious swoop. What could easily be self-indulgent in the work of a lesser film maker is refreshing in the safe hands of such a master. He creates a specific world for his story, full of the artifice of the stage, and allows it to play out beautifully. Instead of a cold technical exercise (he intercuts the performances of the play between the video, the actors performing as they watch it, and the actors on CGI sets), we are instead treated to a warm, richly moving and oddly poignant experience, full of nostalgia and the romanticism of performance. The ensemble cast, who use their own names in the film – many of whom have a long history with Resnais (including veteran Michel Piccoli), are equally stunning as both themselves and in their roles within the play.

Intelligent, warm, touching and above all original, You Ain’t Seen Nothing Yet is one of the richest experiences you could ever possibly hope to have in a movie theatre. Do not miss it.

You Ain’t Seen Nothing Yet is in Australian cinemas from 13 June through Sharmill Films.