The film is everything you would expect - nothing more and nothing less. Wedding Crashers stars Vaughn and Wilson play the only characters they know how to play, and there’s even a cameo from the ubiquitous Will Ferrell.

Google’s list of achievement includes making a search engine, an email service, and a searchable world map. In The Internship, Google adds yet another string to its bow. It has made a film.

While The Internship is not explicitly made by the online company, the level of product placement means it may as well be. Indeed, the film is bereft of any real conflict, a clear indicator that director Shaun Levy wasn’t keen to combine tension with one the globe’s most recognisable brands. With that said, it’s fair to consider The Internship one of Google’s less spectacular creations; unlike most of its products, the film is formulaic and predictable.

The Internship sees recently sacked forty-somethings Nick (Owen Wilson) and Billy (Vince Vaughn) apply for an internship at Google. As the oldest interns among a group of youthful college whiz kids, the duo fast becomes the butt of all jokes as they fight for a permanent position within the company.

The film is everything you would expect – nothing more and nothing less. Wedding Crashers stars Vaughn and Wilson play the only characters they know how to play, and there’s even a cameo from the ubiquitous Will Ferrell. Meanwhile, Rose Byrne delivers a dreadful Australian accent (despite it being her native tongue), while a bunch of uncredited lap dancers give the film its uniform dose of T&As. 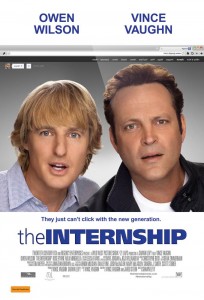 The script is another can of worms altogether. First of all, ten minutes of screenplay is dedicated to an inconsequential quidditch match played between two teams of interns. Secondly, at least two of the main characters – Tiya Sircar’s Neha and Josh Brener’s Lyle – sway back and forth between normal and downright weird. Finally, the closing scenes make absolutely no sense, not least because of an impassioned speech given by a completely undeveloped character.

As easy as it is to find flaws in the film though, it’s difficult to feel any animosity towards this feel-good feature. There’s something strangely satisfying about watching Owen Wilson woo a lady, even if she’s quite obviously ten years his junior and we have seen the exact same scene in Wedding Crashes, Hall Pass, and I Spy. Likewise, it’s hard not to smile when token Asian Yo-Yo (newcomer Tobit Raphael) and his endearing young buddies come of age.

The Internship is essentially the Google Buzz of the movie world. It’s been done before, and it’s been done better, but it does not improve nor worsen your life in any way. It’s the archetype mediocre film.

The Internship is in Australian cinemas from 13 June through 20th Century Fox.