Before seeing Fast & Furious 6, directed by Justin Lin with a screenplay written by Chris Morgan, I had never seen any of the previous films in the franchise. Luckily, the opening credits contained a montage of scenes from the earlier films and hinted at what to expect over the next two hours. That is fast cars, outrageous action sequences and copious doses of testosterone. But, if you’re willing to suppress rational thought, Fast & Furious 6 is exhilarating and often humorous, sometimes unintentionally so.

Dominic (Vin Diesel) and Brian (Paul Walker) are currently living in a secluded tropical location and ready to leave their former criminal lives behind, especially since Mia (Jordana Brewster) has just given birth to Brian’s son. However, Luke Hobbs (Dwayne Johnson), the federal agent they successfully eluded in the previous film, arrives to request their assistance tracking down a ruthless military-trained leader of a heist gang. To coax them further, he shows them photographic evidence that Letty (Michelle Rodriguez), Dominic’s deceased girlfriend, is alive and working with the heist leader. They agree and assemble the old team together, along with the requisite fast cars. 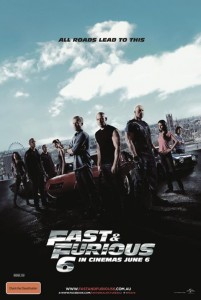 The premise, and the execution, is not without its flaws. The action scenes seem to overwhelm all other considerations, such as character development and a reasonably sensible plot. They’re ludicrous to the point that they’re an affront to the laws of physics; in fact, a new function for cars is proposed – as an anchor, first for a moving tank and then for a plane taking off.

In response to seeing these scenes unfold, there are two general, polarized reactions. The first is a cynicism that brands the whole ordeal ridiculous and an insult to intelligence. The second is sheer delight in seeing thrilling, adrenalin-filled car-chase sequences (with the odd tank or plane thrown in for kicks) that boggle the mind and draw laughs from the utter disbelief. I sided with the latter response – if you’re going to begin with a barely plausible premise, you may as well go all the way and run logic over (and back up over it just for good measure).

Overall, Fast & Furious 6 is highly entertaining and lots of fun – just remember to leave logic behind and abandon yourself to the ride.

Fast & Furious 6 is in Australian cinemas from June 6 through Universal Pictures.

Written By
Dan Santos
More from Dan Santos
It appears as if adaptations of dystopian young adult novels are set...
Read More