With a name like Into Darkness, one may be expecting more elements of evil and anarchy. Don’t get me wrong, there is plenty of rampant destruction aboard the latest Star Trek vehicle, but darkness does not seem to be the proper definition. The words “Into Darkness” could really be replaced by the words “sacrificial” and “loyalty”.

After the tremendous film relaunch of the popular Star Trek series in 2009, J.J. Abrams has finally satisfied new and old Trekkies alike with a sequel piece by the name of Into Darkness. All of the familiar faces are back including Captain James Kirk (Chris Pine), Commander Spock (Zachary Quinto), Lieutenant Uhura (Zoe Saldana), Lieutenant Commander Bones (Karl Urban), Scotty (Simon Pegg), Sulu (John Cho) and Chekov (Anton Yelchin). Benedict Cumberbatch joins the cast as the new antagonist, and his identity is worth protecting for any Trekkies who don’t want the surprise spoiled.

Alice Eve also joins the cast as scientist Dr. Carol Marcus, reminding the audience that no matter how far discussions on feminism and the female gaze in cinema go, there will still always be room for at least one flagrant voyeuristic shot of a female scantily clad in underwear for no real apparent reason.

With a name like Into Darkness, one may be expecting more elements of evil and anarchy. Don’t get me wrong, there is plenty of rampant destruction aboard the latest Star Trek vehicle, but darkness does not seem to be the proper definition. The words “Into Darkness” could really be replaced by the words “sacrificial” and “loyalty”.

The crux of the second film sees the team fighting against the threat of destruction by a supposed evil villain (Cumberbatch). Much more synopsising could be occur here, but let’s face it, we all know that the good guys will face a threat against their livelihoods and for all of which they stand, only to fight back with discernably stronger morals and impressive machinery that explodes gunpowder and lasers across the screen for many a sequence. 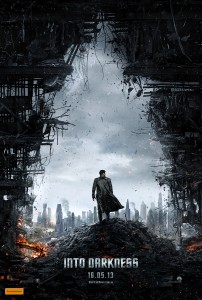 And yes, Abrams uses these scenes of explosions and destruction to impress, pushing visual and computer generated effects to the best of their technology. The 3D even looks good (of which this reviewer is usually highly critical of), but unlike films like Life of Pi and Avatar, Into Darkness would not lose much quality if seen in 2D.

While scenes of mass destruction are powerful in nature, it is the smaller violent scenes of punching that are quite brutal, exacerbated by the exaggerated sound effects. Several heads receive the focused attention of direct punching to the skull, prompting a strong knee-jerk response. Other elements prompted similar responses, including Michael Giacchino’s highly emotive score (which was simultaneously enjoyable and completely over-the-top) and Karl Urban’s terrible one-liners (thankfully highlighted and chastised by Kirk).

The distinct flaw in this film relates back to the character played by Cumberbatch (though not in his very engaging performance). With the reminded presence of darkness, Cumberbatch’s character falls short of being truly dark and evil. The anarchy he inflicts upon society and against Starfleet is simply a matter of vengeance. The character has a loyalty to his former co-workers that is echoed through the relationships of Starfleet in an apparent Shakespearian subplot usage.

Indeed both the heroes and the villains seem to be all about morals, with a focus on loyalty to their cause, where several sequences highlight the martyr-like sacrifices made for their respective missions. Cumberbatch’s character is really at a clear disadvantage, as we come into the film familiar with Starfleet’s backstory. We are not shown the other story from its own perspective. Perhaps this is just highlighting that there are always two sides to a story, but it would have been much more interesting to see at least a couple of scenes from Cumberbach’s point of view. Of course, there is still plenty to enjoy within the latest adventure of the Star Trek saga, and hopefully Abrams will continue this trend of interesting blockbuster cinema.

Star Trek: Into Darkness is in Australian cinemas from 9 May through Paramount Pictures.

Written By
James Madden
More from James Madden
Eight episodes have seen the aftershock of a moment where a man...
Read More