The end result of this was Despite The Gods, an absorbing document of Lynch’s experience overseeing a rare collaboration between the American and Indian filmmaking worlds.

Five years ago, Australian filmmaker Penny Vozniak found herself in Mumbai, looking after  director Jennifer Lynch’s daughter during the shooting of the US-Indian co-production Hisss. Only intending to stay in India for a short period of time, Vozniak got along with the mother and daughter so well that she was asked to stay for the remainder of the film’s production. With Lynch’s permission, she also began to shoot some footage for the purpose of contributing to the film’s DVD extras.

The end result of this was Despite The Gods, an absorbing document of Lynch’s experience overseeing a rare collaboration between the American and Indian filmmaking worlds. This documentary perhaps makes clear as to why such ventures don’t take place that often. The cultural differences between cast and crew, as well as the unique challenges of filming on location in India, are just a few of the challenges that Lynch is forced to face in bringing Hisss to completion. 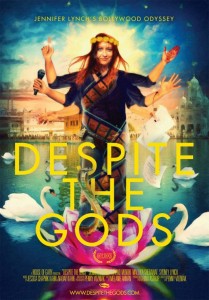 As fascinating as it is to observe the events behind the scenes of a complex international co-production, the film also serves as an intriguing study of Jennifer Lynch as a filmmaker and individual. The fact she’s the daughter of renowned director David Lynch is presented as both a blessing and curse.  She’s faced an uphill battle to establish herself as an artist given her father’s prominence, which perhaps explains why she chose to take on such a demanding project in the first place.

Lynch is an engaging on-screen presence throughout,  possessing a particularly energetic and expressive personality. Her openness with Vozniak as the production begins to spiral into chaos is a key factor in elevating this film beyond the mundanity that characterises most ‘making of’ documentaries.  There are also lighter moments included that demonstrate the camaraderie which developed between the director and members of her cast as they do their best to adapt to the trying circumstances.

Hisss was both a commercial and critical disaster upon release, and Lynch ultimately chose to distance herself from the finished product. Despite The Gods holds back from attributing blame for this outcome, instead opting to capture the perfect storm of adverse factors that contributed to this film’s fraught gestation.

Despite the Gods screens as part of the Indian Film Festival of Melbourne, on May 6 at Hoyts Melbourne Central at 6.30pm, followed by a masterclass with director Penny Vozniak.