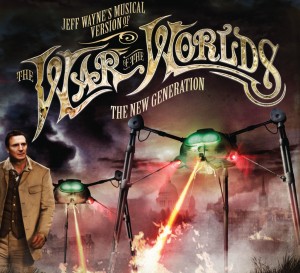 Courtesy of Sharmill Films, Film Blerg is giving away 10 double passes to see JEFF WAYNE’S WAR OF THE WORLDS, in cinemas Friday 24 May. This is for a Melbourne preview screening on Wednesday 15 May, 6.30pm at Rivoli Cinemas in Camberwell, VIC. Please enter only if you are able to attend.

Film Synopsis: Coming to cinemas for the very first time, Jeff Wayne’s Musical Version of The War of The Worlds – Alive On Stage! The New Generation will be screening in high definition and superb 5.1 surround sound at cinemas across Australia in strictly limited sessions from 24 May.

Captured live on stage in front of a sell-out audience at London’s O2 Arena on 15th December 2012, Alive! is a unique musical extravaganza based on H.G. Wells’ dark Victorian tale of a Martian invasion of England.

The show features the hit singles The Eve of The War and Forever Autumn performed live and accompanied by 45 musicians on stage, conducted by Jeff Wayne. A multi–media experience, the production includes a host of special effects with CGI on a 100ft–wide ‘animation wall’, pyrotechnics, illusions and leaf drops. Filmed in high definition and 5.1 surround sound, Jeff Wayne’s Musical Version of The War of The Worlds – Alive on Stage! The New Generation is ideal family entertainment brought to life on the big screen.