The idea of the prodigal son returning home after an extended absence has been done a lot in movies. Because it’s so thematically rich though, unlike other plot cliché’s, it’s also been done well, memorably in movies like The Indian Runner, You Can Count on Me, No Looking Back and in Australia’s own (extremely worthy, early Russell Crowe vehicle) The Crossing.

The idea of the prodigal son returning home after an extended absence has been done a lot in movies. Because it’s so thematically rich though, unlike other plot cliché’s, it’s also been done well, memorably in movies like The Indian Runner, You Can Count on Me, No Looking Back and in Australia’s own (extremely worthy, early Russell Crowe vehicle) The Crossing. People Like Us, the debut feature from screenwriter Alex Kurtzman as director, written with his writing partner Roberto Orci (whose collective credits include the first two Transformers movies), mines similar territory. However, the film descends into unintentional melodrama that leaves the audience viciously angry at the filmmakers for insulting their intelligence with not only such generic and predictable characters in a mediocre plot, but at the ease with which the filmmakers seem to think they can manipulate them.

The story of the film involves the character of Sam (Chris Pine), a corporate stooge involved in shoddy deals in New York, returning to his childhood home in Los Angeles when his estranged father dies. When he gets there he finds out his father had a daughter (Elizabeth Banks) with another woman and has left her a cool $150,000 for Sam to give to her, which would go a long way toward bailing him out of some trouble he’s gotten himself into in New York. Along the way we meet a group of characters and the writers play pile on with the complications, giving them all a bunch of redundant, easily solvable problems which seem to exist solely for the purpose of filling out the films running time. 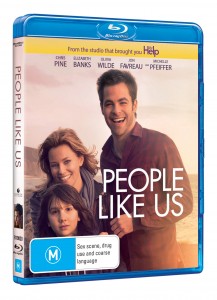 The main problem with the film is the completely wrong style Kurtzman has chosen for it. Visually, he applies a big budget aesthetic- constantly moving camera, quick cutting, edgy lighting and stark widescreen composition- which feels inherently false for the small, intimate drama of his subject matter. Narratively, the problems are even worse. The duo still seems to be writing for a big budget special effects plot-driven movie, which this simply isn’t. What might be a breath of fresh air in Transfomers, is here not only dull, but insulting to the intelligence of the audience. Banks’s character for example is a recovering alcoholic who works in a, you guessed it, a bar! Naturally, she’s also a single mother with a problem child. Please.

Despite being misconceived, the film is redeemed somewhat by its actors who are committed to their performances. Pine and Olivia Wilde show depth not necessarily present in some of their other work, Banks is as warm and reliable as ever, only Michelle Pfeiffer seems to over act but that can’t be helped when every scene she’s in requires a ridiculously over the top display of emotion.

There’s a moment during the film when one of the characters listens to a self-help tape to overcome situations which lead to anger and frustrations, after watching People Like Us, I felt like searching it out.

People Like Us is released in Australia on DVD and Blu Ray on 24 April through Disney.

Written By
Chris Smith
More from Chris Smith
Something of a spiritual companion piece to his penultimate masterpiece You Ain’t...
Read More