Have you ever wondered what it would be like to taste your favourite celebrity? Sink your teeth into their meat? Catch their STDs? Well, Brandon Cronenberg has. In fact, if I was David Cronenberg, I’d be a little worried. Have you ever wondered what it would be like to taste your favourite celebrity? Sink your teeth into their meat? Catch their STDs? Well, Brandon Cronenberg has. In fact, if I was David Cronenberg, I’d be a little worried.

In his feature debut, Cronenberg (who writes and directs) envisions a world where celebrities are less people than commodities. Companies now acquire viruses like Herpes and flu from celebrities to sell to obsessed fans. Meat is now grown from the stem cells of celebrities and branded as such. If you wanted to, you could have a George Clooney parmigiana or a Scarlett Johansson stew and grow that connection a little more. It’s all a bit weird really, putting it mildly.

This fetishisation of celebrity connection is what drives the Lucas Clinic, a company which deals out celebrity viruses to ‘connoisseurs’ from the adoring public. The gaunt and lifeless Syd March (Caleb Landry Jones) is one of its employees, a salesman who uses machines to manipulate the viruses into copyright-protected non-contagious assets. With this expertise at hand, Syd is also an active smuggler to private dealers. Regrettably, his existence is devoid of friends, family, smiles and any idea of colour or variety, making him rather a dull lead. 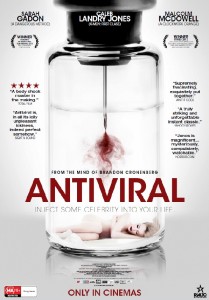 When Syd buys into the buzz surrounding one particular sick celebrity, Hannah Geist (Sarah Gadon), and gets the chance to sample her affliction, he can’t help infecting himself. Though things are not what they seem and he starts to gain unwanted attention from dealers and fans, all wanting a slice of the cake… or Hannah, for that matter.

With themes of vampirism, addiction and the idea of celebrity being a viral epidemic pervading the dreary landscape, Antiviral gives new meaning to the phrase ‘consumer culture’. By no means is this a comfortable film to watch, with E.C. Woodley’s insistent soundtrack helping to establish a claustrophobic atmosphere.

Cronenberg’s direction is never less than assured as he carries out his vivid dream. His plot does have a strange logic even if you can’t help but squirm at some of the plainly immoral habits. It isn’t so much graphic in a gory sense, more in a perverse and clinical one and is certainly not complimentary of the Hollywood environment.

Unfortunately, the lethargic pace and oft-repeated close-ups of needle injections tend towards tedium. Perhaps the biggest factor preventing any sort of engagement was a total lack of character development. Jones’ Syd is a grim, pasty-white hermit living life in willing submission and his soulless expression gives us little to empathise with. The result is a film that alienates you too much to be genuinely disturbing. It is a pity because Cronenberg Junior shows a lot of promise.

Antiviral is in Australian cinemas from 25 April through Rialto Distribution.