Films that explore terrorist attacks on America as their central plot line aren’t exactly a rarity these days. Enter action-packed thriller Olympus Has Fallen, directed by Antoine Fuqua and written by Creighton Rothenberger and Katrin Benedikt.

Films that explore terrorist attacks on America as their central plot line aren’t exactly a rarity these days. Enter action-packed thriller Olympus Has Fallen, directed by Antoine Fuqua and written by Creighton Rothenberger and Katrin Benedikt. The film features a terrorist attack on America’s most famous front lawn and most protected building, the White House and the eponymous ‘Olympus’.

Mike Banning (Gerard Butler), a former guard for the American President (Aaron Eckhart), now works in an office in a government department following the death of the First Lady (Ashley Judd) in a car accident. However, when the White House is attacked and overtaken by a North Korean terrorist group determined on instigating America’s downfall, Banning takes it upon himself to almost single-handedly defeat the terrorists, rescue the hostages, including the President, and avert catastrophe. Morgan Freeman finds himself as the Acting President, whilst Melissa Leo plays the Secretary of Defence. 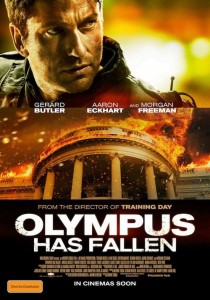 Unsurprisingly, the film is heavy on the action and violence and light on character development. Nevertheless, the action scenes are tense and well executed, especially the lengthy scenes of the siege on the White House. The film doesn’t hold back on the bullets, blood or body count either. Gerard Butler puts in a strong performance, equally adept at efficiently dispatching terrorists and delivering humorous expletive-ridden quips, sometimes simultaneously. Aaron Eckhart proves to be a charming and resilient President, whilst Morgan Freeman’s authoritative voice does most of the work in his role. The award for most committed performance must go to Melissa Leo, who plays the Secretary of Defence with staunch resolve despite her physical suffering.

However, as to be expected with a film about an attack on the White House, Olympus Has Fallen contains numerous unsubtle, overt attempts to invoke patriotic feelings; from its inception, the film is laden with sweeping musical scores, speeches reiterating America’s tenacity, and waving American flags (one even in slow motion). Additionally, the dialogue often comes across as forced and inauthentic. And whilst the action provides thrilling moments throughout, Olympus Has Fallen isn’t ground-breaking. Most of the time it was utterly predictable, and this unoriginality ultimately renders it a middling effort.

Olympus Has Fallen is in Australian cinemas from 18 April through Roadshow Films.