If you weren’t you, who would you be? That’s the question Lorraine Levy asks us in her captivating film The Other Son.

If you weren’t you, who would you be? That’s the question Lorraine Levy asks us in her captivating film The Other Son. The Other Son begins with the kind of premise nightmares are made of; two children are accidentally switched at birth, and it takes 18 years before anybody figures it out. This in itself is an extremely engrossing storyline, in that it throws one’s ideas of identity, belonging, and family into a whirlwind.

What takes this film to a whole new level, though, is that the two sons and families are from different backgrounds. Joseph (Jules Sitruk) is from Tel Aviv. Yacine (Mehdi Dehbi) is from the West Bank. The result is a highly intelligent film about the Israel-Palestine conflict. 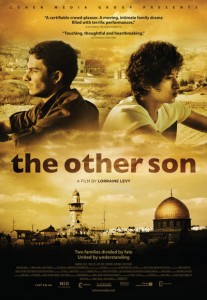 While Levy focuses on the notions of family connectedness and ethnic identity, the strength of this film is in the contrasts of the local landscape. Whereas Tel Aviv is a thriving metropolis, the West Bank feels like a wasteland, set a thousand years in the past. It’s this juxtaposition of locales – moreso than the relationships between the sons and their respective “new” families – that provokes the most self-reflection.

Indeed, it is not only Joseph and Yacine who are challenged, but the audience as well. By inviting the filmgoer to empathise with both families, Levy helps one eradicate their existing attitudes towards either territory while watching the narrative unfold.

The only thing missing from this film is context. While most people who see this film will have a basic understanding of Israel-Palestine relations, the film assumes too much prior knowledge about the characters. Yacine’s older brother Bilal, for instance, seems to transform from a kind-hearted brother to a menacing anti-Semite overnight. Likewise, the tension between his Muslim parents can only be understood from a cultural perspective; Levy fails to give the audience any baseline data on what their relationship is like prior to the shocking revelation.

What makes this flaw so evident is that the film is otherwise successful at challenging pre-conceived ideas about Israeli and Palestinian people. Despite being a French film, The Other Son gives the audience unique insights into these two polarised states. Rather than highlighting the war and antagonism between the two sides, The Other Son delivers a message of hope and potential harmony.

The Other Son is in selected Australian cinemas on 18 April through Curious Distribution.

Written By
Kevin Hawkins
More from Kevin Hawkins
Much like the Wes Anderson films that feature in Roman Coppola's back catalogue, A...
Read More