Intelligent crafted, thoughtful and well-made, The Company You Keep is exactly the type of engrossing and lively thriller that we so rarely get to see coming out of America now. With the big budget, special effects-driven extravaganza’s that assault us year in and year out, it would be all too easy to forget that Hollywood used to make good, exciting thrillers, and in their heyday a good deal of them (such as All The President’s Men and Three Days Of The Condor) featured a young Robert Redford in the lead. It makes sense than that Redford, as director and star of The Company You Keep, returns the genre to top form with an exciting, intelligently written and extremely well crafted entry.

The plot of the film, based on the novel by Neil Gordon and adapted by Lem Dobbs, concerns (on a base level) former members of sixties radical movement Weather Underground that are alleged to have killed a security guard in a botched bankl robbery but are now living regular lives under assumed identities. One of them, Sharon Solarz (Susan Sarandon), is arrested on her way to give herself up, which leads a young reporter (Shia LaBeouf) to uncover another one in the form of a single father/lawyer Jim Grant (Redford). Knowing his identity has been uncovered, Grant goes on the lam with the reporter and the FBI (headed by Terence Howard) in quick pursuit. The question arises though: is he actually guilty? Of course this is only the film on a basic plot level (which we’ve all seen before in the likes of The Fugitive), but what makes the film so rich is it’s intelligent thematic exploration of how our past selves come to interact with our present -and inevitably different- selves. 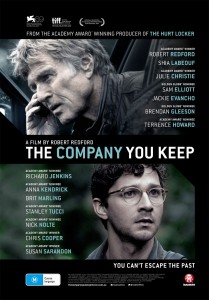 Screenwriter Lem Dobbs should be credited for doing some fine work here after disappointing work with last years Haywire. Previously having written the brilliant and under rated modern noir The Limey as well as the cult-classic Dark City, he presents complex characters that we come to sympathize with and care about, regardless of the things that they’ve done or doing, which is no small feat. His achievement in creating such a rich complexity though becomes the films only real flaw, in as much as the characters actions are never resolved fully enough. His excellent dialogue however, moves effortlessly from realistic to extremely funny, especially when characters comment on the current state of newspaper media.

The performances, as you would expect of a cast of this caliber are excellent. As well as the actors already mentioned, Julie Christie, Nick Nolte, Chris Cooper, Stanley Tucci, Richard Jenkins, Anna Kendrick, Brendan Gleeson and Sam Elliot (among others!) show up in roles ranging from supporting to basic cameos. The revelatory performance in the film though belongs to a committed Shia LaBeouf. While there was never any question he had screen presence and charisma, here he backs it up with a nuanced and driven performance which promises some truly great work to come in the future.

Intelligent crafted, thoughtful and well-made, The Company You Keep is exactly the type of engrossing and lively thriller that we so rarely get to see coming out of America now.

The Company You Keep is in Australian cinemas from 18 April through Madman Films.