Equal parts exciting, amusing, frightening and spectacular, this is how it’s done. Go and see it on the big screen because the television doesn’t do it justice.

Some might say Schindler’s List was Steven Spielberg’s crowning moment in cinema but may I say all those people are wrong. Just… so wrong. When little Tim (Joseph Mazzello) clambers over the seat to peer at the two glasses of water resting on the dashboard, that small thumping ripple announces the arrival of a classic.

Not just a classic storyline, thanks to Michael Crichton’s novel (and his adapted screenplay with David Koepp), Jurassic Park was also a landmark achievement in cinematic technology helping to establish the transition to CGI. 20 years on, that Brontosaurus still holds up pretty well. 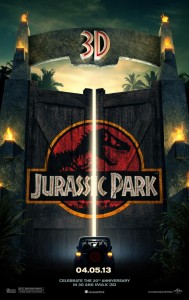 Hammond’s scientists have been busy creating dinosaurs from preserved blood samples, genetically manipulating them to be universally female to prevent breeding.  The results are miracles of modern science, but controlling them is another matter altogether. “Life finds a way,” Dr Malcolm warns them and soon they discover why some things are best left to extinction.

Today, celebrating its 20-year anniversary with a shift to 3D and the vast dimensions of Imax, Jurassic Park is so iconic that it still has a ride dedicated to it at Universal Studios (highly recommended by the way). I can remember hiding behind the couch when I first witnessed the T-Rex open its jaws and let loose that deafening roar. And while I gradually progressed to sitting on the couch in consequent sittings, that roar hasn’t lost any resonance with time.

Back then, it inspired legions of young people to consider taking up palaeontology. That was until these same kids realised dead dinosaurs were nowhere near as exciting as the ones on screen and the scheming, door-opening Velociraptors would all, rather disappointingly, have had feathers. Now, this reasonably effective 3D transfer will attempt to reintroduce dinosaurs to a new generation. And make a bit more money in the process. But, who cares, really? I’m not complaining.

It is terrific to hear John Williams’ iconic soundtrack on the big screen again; to see Jeff Goldblum analyse Triceratops droppings; to flinch at Laura Dern mistaking a loose arm for Samuel L Jackson’s helping hand; to laugh at Bob Peck, playing the gamekeeper, calmly assessing a rampaging T-Rex in his rear vision mirror; and last of all, mock the man getting eaten off the toilet. I particularly enjoyed the last one, to be honest.

Equal parts exciting, amusing, frightening and spectacular, this is how it’s done. Go and see it on the big screen because the television doesn’t do it justice.

Jurassic Park will be released in Australian cinemas on April 4 through Universal Pictures.