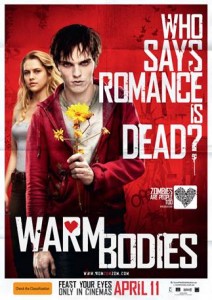 Courtesy of Icon Films, Film Blerg is giving away 5 double passes and posters to see the new Zombie comedy WARM BODIES, out in cinemas from Thursday 11 April.

Film Synopsis: WARM BODIES is a hilarious genre-bending take on the zombie tale, told through the eyes of a zombie named ‘R’ (Nicholas Hoult). Grunting his way through a post-apocalyptic world with the mindless hunger that plagues the undead, he is full of wonder and longing for the time that must have gone before. When ‘R’ falls for Juliet, a human girl (Australia’s own Teresa Palmer), their romance sets in motion events that may start to transform their entire world. Also starring John Malkovich and Dave Franco.