In 1972 Father Lawrence Murphy of the St. John School for the Deaf in Milwaukee, Wisconsin, became the first priest to be publically accused of child molestation in the United States.  A letter, written by a former student of Murphy, was sent to the then State Cardinal, Angelo Sodano. The letter would go unanswered, but in time would spark a worldwide investigation into the Vatican.

Translating to “My most grievous fault (or guilt)”, Silence in the House of God: Mea Maxima Culpa is a horrifying insight into the covering up of paedophilia within the walls of the Catholic Church.  Director Alex Gibney (Enron: The Smartest Guys in the Room and Client 9: The Rise and Fall of Eliot Spitzer) expertly interweaves the testimonies of the abused boys, now old men themselves, against the deafening silence of the Church at large. 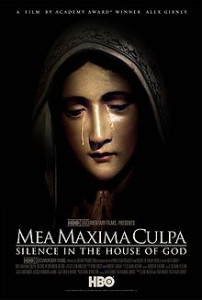 Gibney’s film follows a paper trail that not only finds evidence that the infallible Church had known of Murphy’s activities for over thirty years, but also that his irreprehensible crimes would had been known by the former Pope, Joseph Alois Ratzinger, personally.  At the same time, Gibney shows how the Murphy case, while unpursued in the Federal courts, sparked a worldwide onslaught against the Catholic faith.  Following the outing of Murphy, subsequent cases against priests were heralded in countries across the globe, costing the Vatican billions in damages and seeing unparalleled fallout within the faith.  The fact that the Church knew of Murphy’s crimes, as well as the crimes of countless other priests, is all but unimaginable and seems the plot of a fantastical, if not paranoid, conspiracy movie.

Gibney expertly incorporates stock footage, re-enacted scenes and archival documents from some of the Catholic Church’s most prodigious members, but it is his single camera interviews with the four deaf men who originally brought the Father Murphy case to public attention that are the most heart wrenching to watch, as each recount their suffering in desperate sign language directly to camera.  The words of the victims are given no subtitles, but are respectfully vocalised by actors Jamey Sheridan, Chris Cooper, John Slattery and Ethan Hawke who deliver the testimonies with sobering candidness.

Silence in the House of God is a spellbinding documentary that is as gut-wrenching as it is inconceivable.  The honesty of the victims and their obvious impotent anger they feel toward Murphy all but breaks your heart.  Gibney has crafted at documentary that is methodical in its construction, intensely intimate and demands attention.

Silence in the House of God: Mea Maxima Culpa is Australian cinemas from 21 March through Madman Films.

Written By
Mark Hewitt
More from Mark Hewitt
“Whoever makes this drug is going to be rich” Few directors have...
Read More