So, you want to make an adventure movie, do you? All right, I can see why; they’re as popular as popular can be these days and boy, do they make a lot of money. I love a good swashbuckling adventure, who doesn’t?  You can count me in, but remember, everyone’s making them today, you have to be careful, have to have all the pieces in place, so let’s have a cheeky peek at your itinerary first, shall we?

First, you’ll need a classic fairytale to adapt, or a fantasy novel will do.  HBO’s already nabbed Game of Thrones, Guillermo del Toro’s thinking of making Pinocchio and Kenneth Branagh has dibs on Cinderella for next year, so what else have you got up your sleeve? Jack and the Giant Bean Stalk? Interesting, now there’s a good answer. Who doesn’t love Jack and his Beanstalk, I ask you? Outright classic. Jack, great name. Beanstalks, delicious. But do you have a major director – you’ll need one? He directed X-Men and The Usual Suspects, you say? Terrific, he’ll do just fine. How are we for stars, you’ll need some big names, everyone has big names these days? Ewan McGregor? Brilliant. Nicholas Hoult? I love it. Handsome and can act like a machine, who else have you got, any character actors? Stanley Tucci and Ian McShane? Now, I know you’re lying to me. Forget the Golden Globes, I can smell Oscar gold in the air. Now, most importantly and listen carefully, you’ll need a huge budget and the backing of a major studio…Warner Bros. and 200 million dollars? Now, I ask you, how could we fail? Now get out there and make a classic. 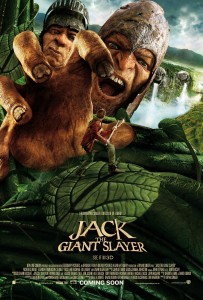 So, where have you been?  It’s been a while since I last saw you. I thought we agreed the movie would be out in 2012 and my watch says it’s already a year late. Studios, huh? Never easy to deal with, I’ll give you that. What about that opening flashback of the war between giants and humans that’s supposed to set the whole story up?  I thought you were going to do something cool with special effects that them kids would like? Well, it didn’t look good, it looked awful, like a video game from 1989 is what it looked like. After that the movie was little more than a cardboard cutout of the original story. So? So, people already know the story, people expect something new: interesting characters, new love affairs and heaven’s forbid a twist ending. Fair enough I’ll give you that, the special effects were decent, but it was all I do not to fall asleep in the last act. You can’t have a thirty-minute fight scene if nobody really cares about the outcome.

Yes, Tucci made brought his ‘A’ game, but people expect nothing less and the rest of the cast did a fine job, but what happened to our director? I thought we were going for edge? The film was corner-less, no real conflict to it. I know you were going for a standalone epic like The NeverEnding Story or Labyrinth, you told me, but I hate to be the one to tell you this, I was bored. Oh well, better luck next time.

Jack the Giant Slayer is in Australian cinemas from 21 March through Warner Bros.