Mama is a film ripe with horror clichés, some of the setups seem oddly familiar and there are scenes that leave you scratching your head with a feeling of déjà vu, swearing you’d seen what just happened in Japanese horrors The Ring or The Grudge.

In 2008, Argentinian filmmaker Andrés Muschietti made the stirring three-minute short film Mama, a vignette of two young girls who are chased through a house by their demonic mother. Five years later Mama has been adapted by Hollywood into a feature film, with the backing of Spanish filmmaker and horror curator Guillermo del Toro.

Mama opens with the distraught Jeffery (Nikolaj Coster-Waldau) loading his two young girls into the back of a family sedan. While driving like a madman to seemingly nowhere the car radio informs us that he is wanted for having murdered his estranged wife and several business associates earlier that morning. Losing control on the icy road, Jeffery crashes the car into the woods where he leads the girls on a search for shelter. After finding an abandoned cabin – possibly the same cabin from Evil Dead and The Cabin in the Woods – the frenzied father prepares to murder both himself and his unaware daughters, but is suddenly killed by a faceless entity that appears from within the cabin.

Five years later, two trackers, employed by Jeffery’s brother, Lucas (also played by Coster-Waldau), find the estranged children alive in the cabin. Now almost completely feral from years of isolation, the girls have become all but completely wild. Lilly (Isabelle Nélisse), the youngest of the two, has failed to develop appropriate speech for a six-year-old and instead behaves like a feral primate, eating only fruit and sleeping under the bed of her sister, while Victoria (Megan Charpentier) talks to a mysterious character named Mama, who their assigned psychologist believes is a fiction created by the young girls to survive their years in the woods. Jeffery and his punk-rock girlfriend Annabel (Jessica Chastain) take the girls in, but their attempts to raise the children as their own rouse the jealousy of phantom Mama sending the would-be parents into a supernatural tailspin. 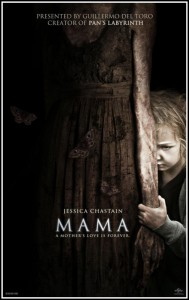 Mama is a film ripe with horror clichés, some of the setups seem oddly familiar and there are scenes that leave you scratching your head with a feeling of déjà vu, swearing you’d seen what just happened in Japanese horrors The Ring or The Grudge.  However, this is not to say that these tried and true tricks aren’t delivered well, rather Muschietti does an admirable job creating an almost gothic atmosphere throughout the picture.  Similarly, the performances are strong across the board. The old adage that a director should never work with children or animals is far from applicable to Mama, as both girls, as well as their sausage dog, do a more than convincing job in their respective roles. While no Jamie Lee Curtis in Halloween, the role that championed hysterical women running away from baddies, Jessica Chastain pays homage to the Queen of Screen and is credible as a woman on the edge, albeit a terrible portrayal of a punk-rock bass player.

For the most part, Mama is a scary and well-made supernatural horror, however after we encounter the paranormal Mama in close-up the film hits the breaks. While most horrors of this effect show their super scary monster in the last ten minutes, Muschietti reveals the entity with about 30 minutes to go, after which the scares are exchanged for silent sighs as you wait for the credits to roll. As a short, Mama was a concise rollercoaster heading down, leaving a lump in your throat in little over three minutes, as a feature unfortunately the film seems conventional, bloated and unnecessarily stretched-out.

Mama is out in Australian cinemas from 14 March through Universal Pictures.

After the trailer is the original short film. Enjoy!

Written By
Mark Hewitt
More from Mark Hewitt
In his new documentary We Steal Secrets: The Story of Wikileaks, director...
Read More