Fans of Delpy’s previously released works 2 Days in Paris and 2 Days in New York will reveal in the film’s lighter moments, while more critical newcomers will appreciate this emerging filmmaker’s ability to balance both sides of the family coin. Based in the French province of Brittany, the film follows the point of view of eleven-year-old Albertine (Lou Alvarez) as she wanders through a boozy family get-together to celebrate the 67th birthday of Mamie Amadine (Bernadette Lafront).  Over the two days in the countryside, the gathered parents eat, drink, sing-along and complain, amidst fights over politics, feminism, war and all topics under the sun, while the menagerie of gathered children cover similar ground but with dirtier faces.

Like the more collective films of Robert Altman and Richard Linklater, Le Skylab is less about plot than it is about a specific time and place, in this case, provincial France in the late 70s. The ambience of the film is heightened by the impeccable use of both set and costume design which help bring the period back to life, while the booming 70s soundtrack further adds to the believability of the setting.  Linklater’s Dazed and Confused comes to mind, as does Spike Lee’s Do the Right Thing, as this film feels like a single episode in a much larger ongoing story.  Like the great ensemble films of Altman, the characters in Delpy’s comedy are constantly standing on one another’s lines, passing food, yelling, whispering among themselves, walking across camera, moving in and out of focus and generally being as manic as families are apt to be when brought together, which all works to create a believable energy on the screen. 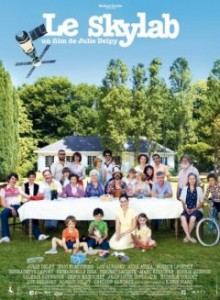 The great virtue of Le Skylab is the film’s ability to merge whimsy, comedy and personal drama into consistent and well-organised structure. Like all families, there’s a balance between the light-hearted moments, downright silliness and tragedy.  There’s an authenticity and depth to Delpy’s work that can be attributed to her improving technical skill, shown particularly in her use of editing, which seamless corrals the endless relationships within the film into one coherent narrative.

If there is a downfall to the picture, it’s in the film’s final ten minutes, wrapping up the memories of July 1979 with the modern-day Albertine interacting with her family while on a train ride, a little too tightly bookended for my tastes, but ending a sprawling film like this was never going to be easy. Having seen all of Delpy’s films to date, this is by far the liveliest and showcases Delpy’s unique talent for writing dialogue and creating believable interpersonal relationships.  Fans of Delpy’s previously released works 2 Days in Paris and 2 Days in New York will reveal in the film’s lighter moments, while more critical newcomers will appreciate this emerging filmmaker’s ability to balance both sides of the family coin.

Le Skylab is in Australian cinemas from 14 March through Hi Gloss Entertainment.

Written By
Mark Hewitt
More from Mark Hewitt
Adapted from the award-winning novel of the same name, Farewell, My Queen...
Read More