Crude, excessively long and just plain misconceived, The Loneliest Planet is not only the perfect case study of how not to make world cinema, it’s also a perseverance test for audiences looking for punishment.

The Loneliest Planet plays like a checklist of the current trends in world cinema from the last ten years. Handheld camera? Check. Gorgeous locales? Check. Slow, meandering pace? Check. Plentiful sex? Check. Plentiful sex with Gael Garcia Bernal? Check. By ticking all of these boxes The Loneliest Planet should be a riveting, emotionally engaging drama with a gripping story and characters we care about, right? Right? Wrong. While it does indeed theoretically contain a recipe for another Y Tu Mama Tambien or The Motorcycle Diaries, The Loneliest Planet is a pretentious, boring and extremely mediocre journey that all but the most patient of viewers will find insufferable.

The plot, what little of it there is, has a backpacking couple, the Mexican Alex (Bernal) and we assume American Nica (Hani Furstenberg) trekking across the Caucasus Mountains in Georgia with tour guide Dato (Bidzina Gujabidze). They walk and talk, walk and talk and walk and talk. It’s not until over half way through the film that what could actually be considered as an event transpires, that even though in any other film it would wind up on the cutting room floor, here because it’s the only thing to really happen in the films excessive almost two hour run time, is treated as life changing. 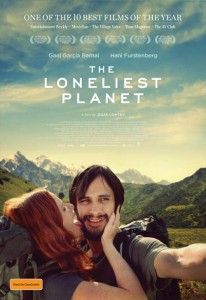 There are some films that are made to play out at a slower pace. Films like Elephant and some of Antonioni‘s films are masterpieces for this very reason, they take their time in either finding the heart of their characters or building up to something as Gus Van Sant does with the shooting in Elephant. The Loneliest Planet does none of this; it’s slow because it simply doesn’t have a story to tell. Despite the best efforts of the charismatic Bernal, we never come to care about the characters or engage with them on an emotional level. Oddly Dato in the final scene becomes the one character we actually seem to connect with based purely on the honesty within the performance. In fairness, every now and then the mediocrity is punctuated by a moment of genuine emotion, but even these seem stumbled upon.

The film at least has the good sense to be visually good looking. The setting makes for some stunning locales which are captured beautifully by cinematographer Inti Briones. Perhaps the film could have done with the derivative overly Herzogian wide shots complete with piercing accompanying musical score. As though being boring and derivative wasn’t bad enough, the film borders on tasteless in its depiction of Nica, especially when the camera lingers on her throwing up or relieving herself.

Crude, excessively long and just plain misconceived, Julia Loktev‘s The Loneliest Planet is not only the perfect case study of how not to make world cinema, it’s also a perseverance test for audiences looking for punishment.

The Loneliest Planet is in Australian cinemas from 14 March through Palace Films.

Written By
Chris Smith
More from Chris Smith
The latest film from world cinema auteur Hsiao-Hsien Hou will not be...
Read More