In a quiet unnamed village somewhere in the heart of Africa, Komona is only a twelve year old girl when her life is irreversibly changed for the worse. Her community’s small population is decimated when a rebel army makes a quick but devastating raid, killing all except the children old enough to fight. Written, directed and co-produced by Canada-based filmmaker Kim Nguyen, the Academy Award-nominated War Witch follows Komona’s story as told to her unborn child.

Given an AK-47, Komona is ordered to execute her parents on the spot as an initiation to a life waging war on the government forces.  In the absence of a parental figure, the captured children are told “this gun is now your mother and father.” It is a chilling and corrupting message. The youthful innocence quickly disappears from their faces and in its place a cold steely resolve develops, created through a mixture of intimidation, oppression and brainwashing superstition. What keeps them going is a purely survivalist instinct and a strange drink the leaders call “magic milk”.

Komona’s title of ‘war witch’ is assumed when it is discovered she has a habit of surviving where others do not, leading soldiers to claim she can tell by magic where the government forces will attack. While she is given special importance, this also increases the rebel army’s hold on her. 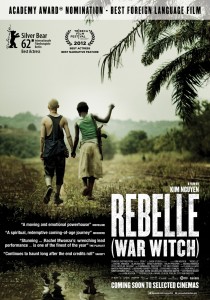 This disturbing tale of the plight of child soldiers never gives us a definite location. While it was shot in the Democratic Republic of Congo, apparently this is inspired by events  in Burma. Scarily, the relocation does not detract from the authenticity. With parties referred to as simply the “Rebels” and “Government”, it is a sad reality in which such a story could come from either side of the globe. It is clear the law-enforcement agencies are well out of their depth in controlling these conflicts and subsequently that freedom from the atrocities has long since been a right.

Despite the grim themes, the film thankfully never exploits violence for melodrama or needless gore. Violence and injury are largely implied and are no less confronting for it. The ambient cinematography from Nicolas Bolduc, at times reminiscent of Terrence Malick’s work on The Thin Red Line, gives this a surprisingly sensitive edge.  In particular, the ghosts haunting Komona wherever she goes have an understated and eerily matter-of-fact presence.

Rachel Mwanza, a non-professional actress, is a revelation as the vulnerable yet determined Komona. Amidst the carnage, her personal journey becomes refreshingly upbeat as she rediscovers joy and companionship with an albino soldier known as Magician, impressively played by Serge Kanyinda. It is a simple yet touching relationship and one which also brings a much needed smile. While the film aptly highlights the injustices, the faint sense of hope in this portrayal is nice to see.

A delicately handled yet unsettling portrait of a country ravaged by civil war, War Witch is thought-provoking and thoroughly deserves its Oscar nomination.

War Witch is in Australian cinemas from 14 March through Curious Distribution.

Written By
Angus Tonkin
More from Angus Tonkin
Last year the United Kingdom was forced into quite an embarrassing retreat...
Read More