Featuring stellar performances of some of Hollywood’s best loved veteran actors, Performance tells the story of a world renowned string quartet The Fugue, whose 25-year long collaboration looks set to come to an end when veteran cellist Peter (Christopher Walken) is diagnosed with Parkinson’s disease.

Featuring stellar performances of some of Hollywood’s best loved veteran actors, Performance tells the story of a world renowned string quartet The Fugue, whose 25-year long collaboration looks set to come to an end when veteran cellist Peter (Christopher Walken) is diagnosed with Parkinson’s disease. Seemingly the straw that broke the camel’s back, the group find it difficult to separate their real feelings from the feelings of the group and their world’s start to crumble down around them. Viola player Julliette (Catherine Keener) and second Violinist Robert (Philip Seymour Hoffman) married when the group first got together after they fell pregnant. Not satisfied in this time of transition to always play second violin, Robert wishes to alternate with first Violinist and resident nut job Daniel (Mark Ivanir) who’s obsession with The Fugue and Beethoven and playing violin have left him a lonely recluse who pushes the buttons of everyone around him.

When Robert and Julliette’s Daughter Alexandra (Imogen Poots) starts taking private lessons with Daniel an unlikely fling begins and The Fugue look set to tear each other apart. But the drama just heightens the intensity of the performance and the passions at play in the music. They build up to a final performance together, but don’t seem likely to make it. 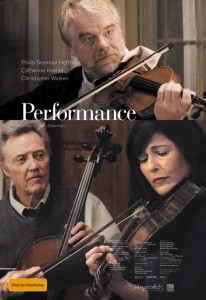 Each of the members of the Fugue plays their part to perfection and Performance plays out like a perfect situational, ensemble piece. Poots is fantastic as the rebellious prodigal daughter but is underused in her role. Those who don’t understand the power and beauty of music will find this picture dull as much of the drama and melancholy is measured through the music and it acts as a metaphor for the turmoil’s of passionate lives.

Christopher Walken is so subtle in this role you would hardly even notice his unique way of speaking. He perfectly portrays the melancholy and desolation of a performer whose body is betraying him in the twilight of his life, and so suddenly it would seem, after the sudden death of his wife and long time collaborator.

Directed by Yaron Zilberman and with a script from Seth Grossman and Zilberman, the movements of Performance are very clearly defined. Performance feels a lot like a play, or a seven suite stanza, a masterful metaphor for Beethoven’s String Quartet No. 14, opus 131, the piece the group attempt as their last; “no arrangement is more beautiful, or more complicated”.

Performance is in Australian cinemas from 14 March through Hopscotch Films.

Written By
Kendal Coombs
More from Kendal Coombs
Bill Murray is an absolute God of the film world, a Mecca...
Read More