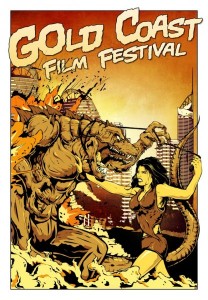 The Gold Coast Film Festival (GCFF) presented by Pacific Fair Shopping Centre today ‘unmasked’ its 2013 Program showcasing 28 feature films from a diverse selection of local and international filmmakers including a host of award-winning films.  Now in its 11th year, the GCFF will be held over 10 days from April 18 – April 28 at Birch, Carroll and Coyle Cinemas at Pacific Fair Shopping Centre on the Gold Coast.

“We are excited to bound ahead full throttle with a fantastic pop culture screen program in 2013.  Featuring high-quality local and international pop culture, thriller and comedy films plus international film makers and stars standing alongside our GCFF ‘Cool Japan’, ‘Telescope’ Turkish program and ‘Queensland Showcase’, there is something for every cinema goer at this year’s GCFF.”

GCFF movie-lovers have seven weeks from today’s announcement to prepare their nerves for the Closing Night film on April 28 with the special advance screening of the much anticipated Evil Dead.  A new vision from the producers of the original and critically acclaimed cult horror classic, Evil Dead is directed by Fede Alvarezhas, hand-picked by Sam Raimi himself, and heralded as the most terrifying film you will ever experience.

Already announced, opening the GCFF on April 18 is the Australian premiere of the international award-winning film The History ofFUTURE FOLK, a sci fi comedy “destined to become a cult favourite” with real-life bluegrass playing alien Jay Klaitz AKA the ‘Mighty Kevin’ attending the red carpet premiere.  The GCFF will also be the first opportunity for Australian cinema-goers to watch Sushi Girl on the big screen with its red carpet premiere scheduled for April 19.  A stylish, ultraviolent crime film in the mould of Tarantino’s Reservoir Dogs, Sushi Girl features a genre cast to die for including Tony Todd (Candyman), Noah Hathaway (Neverending Story) and James Duval (Donnie Darko) who will travel to the Gold Coast with director/writer/producer Kern Saxton and writer/producer Destin Pfaff to attend the GCFF Australian premiere and other GCFF special events.

Other international POP CULTURE Australian premieres include: Blue Dream, a film about critic Robert Harmon (played by James Duval who will be joined by Noah Hathaway to introduce the film at the GCFF); the anthology Doomsday Book, winner of the ‘Best International Film’ at the 2012 FantAsia Film Festival, ‘Best Sci Fi Film’ at the 2012 Toronto After Dark Film Festival plus earning Official Selection at eight International Film Festivals, a South Korean sci fi thriller with a strong comedic undercurrent about a zombie outbreak of self-aware robots and a meteor on a collision course with Earth.  Welcome to the Punch starring James McAvoy, Mark Strong and Peter Mullan will also be screening for the first time to Australian audiences along with My OTHER Me, a slice-of-life documentary about the world of cosplaying directed by Josh Laner.  Lucas Wilson AKA Twinfools will be attending the premiere as well as other special events during the festival to meet his legion of fans.

Queensland premieres include: All Superheroes Must Die with director/writer/producer/ and star Jason Trost and Lucas Till (X Men: First Class) to attend the GCFF premiere; plus Thale, a fantastical horror film about a deadly mythological siren and awarded Official Selection at (amongst others) the 2012 Toronto International Film Festival and 2012 South by Southwest Film Festival.

COOL JAPAN – the GCFF will present two anime features in celebration of Japanese pop culture with Wolf Children, the third film from director Mamoru Hosoda plus a SURPRISE anime feature screening soon to be announced!  The GCFF will also present a documentary about legendary anime franchise Robotech – Carl Macek’s Robotech Universe – with a special, global exclusive ‘sneak peek’ at footage from ‘Robotech Love Live Alive (2013)’.  Robotech online creative and producer Steve Yun will be in attendance for a special Q&A appearance.

International THRILLERS will also be taking centre stage at the GCFF featuring: Dead of the Nite, starring genre favourite Tony Todd (Todd will be introducing the film at the GCFF); Antiviral, winner of the ‘After Dark Competition’ at the 2012 Chicago International Film Festival; plus Compound Fracture starring three iconic celluloid killers, Tyler Mane (Michael Myers in Rob Zombie’s Halloween), Derek Mears (Jason Vorhees in Friday the 13th {2009}) and Muse Watson (Ben Willis in I Know What You Did Last Summer) with Hollywood actor and star Todd Farmer doing a Q&A for this special GCFF screening event.

GCFF audiences will see Brisbane’s Josh Lawson in the Queensland premiere of Crave.  With echoes of Taxi Driver and Fight Club and winner of ‘Best First Film’ at the 2012 FantAsia Film Festival and winner of ‘Best Director’ of the 2012 Fantastic Fest 2012, Crave also stars Australian Emma Lung plus America’s Ron Perlman (Hellboy) and Edward Furlong (American History X, Terminator 2: Judgment Day.)  Other Queensland premieres include: Errors of the Human Body, the haunting science fiction debut of Australian writer-director Eron Sheean; Compliance, a film that dares to rock you to your very core and which occasioned numerous walkouts at its Sundance premiere; plus the French thriller, Sleepless Night.

GCFF also offers its audiences the perfect ‘COMEDY antidotes’ with featured titles including: Lloyd the Conqueror starring comedian Brian Posehn (The Sarah Silverman Program) and Mike Smith (Trailer Park Boys); the Queensland premieres of Game of Werewolves, a multiple audience award winner across the globe plus Grabbers, a celluloid cocktail of comedy, horror and sci fi, boasting Official Selection at over 15 International Film Festivals and quoted as the “hysterical Sundance audience crowd-pleaser.”  Fans of zom-coms will be more than ‘shuffling’ to Broadbeach for the Australian premieres of Cockneys VS Zombies starring Alan Ford, Harry Treadaway, Michelle Ryan and the late Richard Briers winning Official Selection at over 10 International Film Festivals; plus the hilarious A Little Bit Zombie, winning a host of awards including ‘Best Feature Film’ 2012 Canadian Filmmakers’ Festival, ‘Best Film’ at the Honolulu International Festival 2012 and ‘Best Film’ at the 2012 Las Vegas International Film Festival.

QUEENSLAND SHOWCASE – the GCFF is excited to be presenting two Australian premieres with: Nowhere Else, a film inspired by real-life events, written, directed and produced by Brisbane-born Danial Donai and starring cult Australian actor Vernon Wells; and following its award winning premiere at the 2012 Action on Film International Film Festival for ‘Best Foreign Film’ and winner of ‘Female Action Performer of the Year’, Agent Elite, the feature directional debut from Gold-Coast based James Richards starring Naomi Karpati, who along with Richards, will be attending its GCFF Australian premiere for a special event Q&A session.

TELESCOPE: FOCUS ON TURKEY – In the spirit of A.N.Z.A.C. day, the GCFF invites audiences to experience the cultural delight of three international award winning dramatic films from Turkey including, Beyond the Hill, the debut feature of Emin Alper, a psychological drama set in the Turkish wilderness and winner of ‘Best Film’ and ‘Best Screenplay’ at last year’s Asia Pacific Screen Awards.  Also screening, Night of Silence, a story of a veiled, young bride and her arranged marriage to a man who has spent half his life in prison.  Winner of the ‘Crystal Bear’ at the 2012 Berlin International Film Festival it will be joined with the Australian premiere of Inside, adapted from Dostoevsky’s novel “Notes from Underground” and winner of ‘Best Actor’ and ‘Best Film’ at the 2012 Dubai International Film Festival.

The full GCFF program of films and events now available at gcfilmfestival.com

TICKETS ON SALE THIS FRIDAY MARCH 8 2013