Swamps, sweat, humidity and crime are the focus of Lee Daniels’ third directorial effort, which takes a curious look at Southern USA in the late 1960s. Adapted from Pete Dexter’s 1995 novel of the same name, The Paperboy follows love-struck Charlotte Bless (Nicole Kidman) who comes into contact with Jack Jensen (Zac Efron), Jack’s journalist brother Ward (Matthew McConaughey) and Ward’s writing partner Yardley (David Oyelowo). Charlotte requires assistance with the exoneration of her most recent boyfriend/prison inmate Hillary van Wetter (John Cusack), whom she believes was wrongfully incarcerated over the murder of the local and hated sherif. As the investigation gets underway, a seedy underbelly is exposed, placing the main characters in the thick of it all.

The Florida presented in this film is sticky, criminal and turbulent. Pulp only begins to describe the aesthetic associations placed upon the characters and their settings. They belong to a world of dirt, crime, degradation and cheapness, exhibited with self-awareness but without shame. These people know they are low-class and engage on a simple, basic and primal level.

A significant shift in tone comes when the main four characters visit Hillary in prison. Hillary and Charlotte engage in a public sexual act without even touching nor revealing any skin. Hillary previews the primal beast he later unlocks, and engages Charlotte in a bizarre sexual encounter that leaves everyone, including the audience, feeling dirty. This moment, while humourous, changes the tone from quirky to full-on messed up (particularly more messed up than the “infamous” urination scene between Kidman and Efron.) 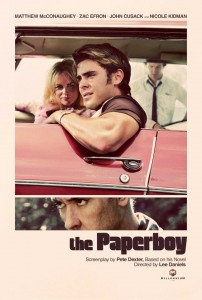 Lee Daniels has become synonymous with strong female performances and The Paperboy is no exception. Nicole Kidman is revelatory as Charlotte, displaying a shifting vulnerability and melodic rawness. Kidman’s Charlotte is reminiscent of Elizabeth Taylor‘s Maggie in Tennessee Williams’ Cat on a Hot Tin Roof; bored and senseless with a brutal sexuality, and dangerous with the potential for harm that she may lead herself into. Kidman holds nothing back and enjoyably chews up every piece of scenery she can get her hands on.

Purposefully tacky cheapness reigns supreme over the production design, showing Daniels’ desire for its characters to look classier, but without having the ability to ever actually achieve so. With fierce performances and a strong screenplay from Daniels and Dexter, The Paperboy is an enjoyable character study in tackiness so repulsive that it exudes an alluring charm.

The Paperboy is in Australian cinemas from 28 February through Roadshow Films.