Damien Hauer (an unkempt Jean-Pierre Bacri) is a down-trodden Parisian professor whose relationship with long-time companion and playwright Iva (Kristin Scott-Thomas) is falling apart. While Iva is getting close to her leading man at rehearsals, Damien has a growing attachment of his own to a young woman he knows from his bookshop, the shy but affable Aurore (Isabelle Carre). Typically stubborn pre-teen son, Noé (Marin Orcand-Tourres) is the only thing left in common between he and Iva and is becoming increasingly restless at his parents’ neglect. If you were to leave the plot there, you would not guess this is a comedy but then French films have a knack for defying convention.

When Damien is tasked with asking a favour of his dad, Sebastien (Claude Rich), a high-ranking state judge, to prevent a friend of a friend from being deported, he grudgingly agrees, as much as he would like to avoid contact. However, Sebastien is proving elusive and given his personal circumstances, Damien is becoming increasingly frustrated at how little is going his way. 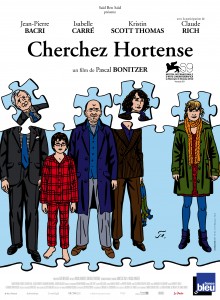 From the start, we are geared to expect that a break-up will eventuate and lo and behold it does with a surprising lack of fuss. Bacri’s Damien is a pragmatic man, a professor of Asian Civilisation and a regular chess player, and he accepts the break-up with the same measured logic as with everything else. He doesn’t get angry but he is an experienced moper. What comes after this disruption is less straightforward than usual, though you can be sure he will accept it with the same surly resignation.

This light-weight affair never once breaks into a jog and yet is oddly engaging for its overly plodding pace. Largely thanks to a smartly judged script from co-writers Pascal Bonitzer (who also directs) and Agnes De Sacy and classy performances from an experienced and appealing cast keep this from being the collection of flotsam it threatened to become.

Riffing on class staples with understated satire, the laughs don’t flow thick and fast but rather spasmodically. While the pairing of Iva and Damien are as humourless as cattle headed to the abattoir,  Carre’s Aurore illuminates every scene, habitually measuring Damien’s mood in terms of ‘ruffledness’ and various insightful types of smiles. She is the antithesis of Iva and a character we can genuinely root for. As is Noe, whose exasperation at his parents’ dysfunctionality can be quietly amusing if a bit sad.

The best scenes, however, are reserved for Claude Rich and his encounters with Damien. A scene where Damien discovers an alarmingly different side to his father in a Japanese restaurant is an unexpected delight in the midst of a film where direction is uncertain and unimaginative.

Looking for Hortense is screening at the 2013 Alliance Francaise French Film Festival running from March 5 – April 7 across Australian cities.