In many ways, Side Effects is the perfect swan song for Soderbergh. Like many the films in his catalog, it is impeccably made, with the director showing his panache for composition, framing and editing throughout. “Whoever makes this drug is going to be rich”

Few directors have set the rigorous pace of Steven Soderbergh. Since the release of sex, lies and videotape in 1989, it seems as if the filmmaker has had his hand in the production of every other movie released. Soderbergh is a movie-making machine like no other, he’s directed over 25 features, produced several films and television series and has been involved in countless other roles on countless other projects. He’s also enjoyed the most illusive of filmmaking luxuries, gaining both critical and financial success, with his films being awarded multiple Oscars along the way. Now, with the release of Side Effects, his sixth film since 2011, the seemingly inexhaustible director is apparently calling it quits.

A thriller set against the world of pharmacology, Soderbergh’s drama moves along at measured pace. Beginning with a crane shot across the Manhattan skyline that blends into the bloody scene of a murder, the film then jumps back in time to three months prior. The story centers on Emily Taylor (Rooney Mara), a depressed newlywed who has spent the majority of her first five years of marriage alone, as her husband Martin (Channing Tatum) serves out a prison sentence for insider trading. Upon Martin’s release Emily’s disposition takes a slide for the worse and eventually culminates when she thrashes her car into the wall of a parking garage. Worried for her safety, Emily is forced to consult with clinical psychologist Jonathan Banks (Jude Law) who after a slew of other treatments eventually prescribes Emily the new wonder drug Ablixa and this is where the plot really takes a turn. On the surface, the drug seems to have a remarkable result on Emily, with the only apparent side effect being her strange sleepwalking

The less said about the plot from here the better, as the narrative swings into a twist driven thriller. Initially appearing as a commentary on the big business of anti-depression drugs, much like Erin Brockovich was to corporate greed or Traffic to the War on Drugs, Side Effects quickly turns on expectations to become a murder mystery reminiscent of such films as Double Indemnity and Body Heat. 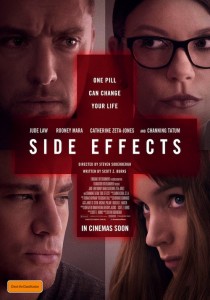 Soderbergh always manages to produce a finished film that is well acted, well crafted, and is, above all else, professional, and this latest offering is no different. The proficient quartet of Rooney Mara, Catherine Zeta-Jones, Channing Tatum and Jude Law, are all major contributors to the reality of Side Effects, but is Mara who truly shines as the distraught Emily. Much like her performance in The Girl with the Dragon Tattoo, Mara appears effortless with her considered tone and those unwavering eyes that draw the viewer more forward in their seat with every passing scene.

In many ways, Side Effects is the perfect swan song for Soderbergh. Like many the films in his catalog, it is impeccably made, with the director showing his panache for composition, framing and editing throughout. With this being said, the narrative does end in perhaps too perfect of a bow, with all loose ends ultimately accounted for. However, Soderbergh’s ability behind the camera to make the seemingly sterile corridors of hospitals and sparse whitewashed walls of doctors’ offices seem beautiful and almost painterly is reason enough to see this film. While Side Effects may not be the director’s best offering to date, it is prime example of a filmmaker truly in control of his talents.

Side Effects is in Australian cinemas on 28 February through Roadshow Films. For more information on Ablixa a fake website has been set up to promote the film.