Visually alluring and breathtaking, Cloud Atlas is a triumphant piece of filmmaking that left me wanting more. Which is, after all, quite an impressive and rare feat for a film nearly three hours in length.

At some point, it is likely that you have comes across the concept of the Six Degrees of Separation (or even the pop-culture expansion “Six Degrees of Kevin Bacon”). The general theory denotes an interrelated connectedness between each person on the planet through a series of linked steps. From academic theories to notions popularised by playwright John Guare, the idea that we’re all related in to one another in some way is both comforting and overwhelmingly existentialist.

Adapted from David Mitchell’s novel of the same name, Tom Tykwer, Lana Wachowski and Andy Wachowski have brought Cloud Atlas to the big screen, playing upon these aforementioned ideas of connection across six different time periods and locations. A character played by Susan Sarandon sums it up most concisely: “Our lives are not our own. From womb to tomb, we are bound to others. Past and present. And by each crime and every kindness, we birth our future.”

Thematically distanced and fragmented from one another, Cloud Atlas’ stories range from tales of a pro-abolitionist act occurring at sea in 1849; lost love and musical composition in 1936; a corporate whistleblowing investigation in 1973; seniors escaping from a retirement village in 2012; genetically engineered clones in Neo Seoul in 2144; and post-apocalyptic society in “106 winters after the fall”. They may seem separate, but many moments remind us of the connection between pasts and presents, often with characters citing a sense of déjà vu, as if they’ve already met in another world. 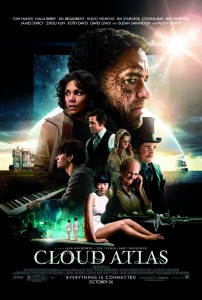 Cutting into each other in both connected and rather sporadic moments, the film often requires a puzzling channelling of energy for the viewer. Where most films would match related moments of sadness or happiness, Cloud Atlas – in one specific moment – cuts from a farcical scene of Jim Broadbent escaping from the clutches of Hugo Weaving (in drag) during a Scottish barroom brawl to a pursued Halle Berry running from Hugo Weaving (not in drag) through the streets of San Francisco. Though the scenes share Hugo Weaving as a malevolent antagonist, the energy changes from comedy to thriller in a matter of seconds, urging the viewer to swiftly stop laughing and pay attention.

Playing multiple characters afforded a repertory experience for the actors, though some seemed to be repeating roles, such as Jim Broadbent who played at least three old and confused men. Jim Sturgess and Hugh Grant are both provided with the most differing roles, appropriately varying on ages and accents. Recalling a recent film where Hugh Grant has been given a chance to show some acting range away from his usual dapping British “charmer” is difficult, but Cloud Atlas at least gives the Grant the chance to play against type.

Halle Berry, Tom Hanks, Susan Sarandon, James D’Arcy, Hugo Weaving and Jim Broadbent give fine too, but the standout performers are Ben Whishaw, Doona Bae and Jim Sturgess. And it is in the Neo Seoul and Cloud Atlas Sextet segments in which these actors thrive during the most engaging and interesting segments.

Ambitious in scope and vision, the Wachowski’s and Tom Tykwer deserve much commendation in making such an expansive artistic work that blends genre, style and storytelling so beautifully and with such grace. Tom Tykwer also provides the moving musical score alongside his long time collaborators Reinhold Heil and Johnny Klimek.

Visually alluring and engaging, Cloud Atlas is a triumphant piece of filmmaking that left me wanting more. Which is, after all, quite an impressive and rare feat for a film nearly three hours in length.

Cloud Atlas is in Australian cinemas from 28 February through Roadshow Films.