If you want to enjoy Cirque Du Soleil fork out the cash for tickets to Ovo, they are amazing acrobats and masterful characters and performers, but don’t waste the movie ticket money going to see Cirque Du Soleil: World’s Away.

There is absolutely no denying that Cirque Du Soleil is the greatest circus in the world and that they put on amazing shows. The feats of strength, flexibility and human endurance on display at any one of their performances will make anyone’s hamstrings hurt and eyes pop out of their heads. But why James Cameron’s people felt the need to turn a variety of their past shows into a film with a light weight storyline is beyond me. There’s something about putting a camera, a projectionist and 3D glasses between the audience and the circus performers that makes their skills and abilities less awe-inspiring. Now I for one have always wanted to see The Beatles Love which Cirque Du Soleil only performed in the Mecca of spectacular-spectacular, Las Vegas, but World’s Away is not the way to do it.

I’m struggling to find the words to constructively critique this film but it’s not a film in the traditional sense. The 3D is unnecessary, the storyline flimsy at best; these people are performers, not actors. It would have been more useful, in this format, to make a documentary, going behind the scenes of the practices, the art department development, rehearsals with their costumes, etc. The format falls flat in this medium. 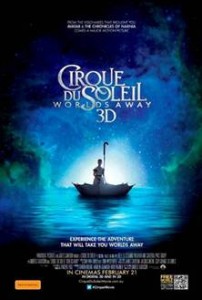 So a cute girl who’s a little out of the ordinary goes to the circus and makes eyes at the cute trapeze boy. He falls and gets sucked through the ground into a parallel circus universe. She follows and goes on a magical adventure through circus land to find them. There are odd little side characters who, while helping her, seem to also be distracting her with their acrobatics. Not knowing which circus they are often makes their motivations unclear and what we have is a confusing mess of interwoven storylines and crazy characters with little sub-plots and enemies and fight scenes, and Beatles music.

If you want to enjoy Cirque Du Soleil fork out the cash for tickets to Ovo, they are amazing acrobats and masterful characters and performers, but don’t waste the movie ticket money going to see Cirque Du Soleil: World’s Away.

Cirque du Soleil: World’s Away is in Australian cinemas from 21 February through Paramount Pictures.

Written By
Kendal Coombs
More from Kendal Coombs
Released in the States last year and in contention for a Best...
Read More