Set two years before the US Civil War, the film opens with bounty hunter Dr. King Schultz (Christoph Waltz) purchasing a slave named Django (Jamie Foxx) who has pertinent information regarding an outlaw. Emancipated, Django joins Schultz in hunting a winter’s worth of wanted men. Soon, a plan is hatched to free Django’s wife Broomhilda (Kerry Washington) from the ownership of the well-groomed and affluent Calvin Candie (Leonardo DiCaprio).

Django continues Tarantino’s trend in heavily stylised work, this time paying homage to specifically martial arts films, exploitation cinema and the spaghetti western genre. It is of no great surprise that the film has caused controversy among varied groups and individuals for its subject matter; Django is wildly violent and brazenly profane in a time of political correctness and still evident racism.

In particular, Tarantino’s use of a now taboo racial slur is edgy in its frequency. Rather than being ignorant or insulting, Tarantino is addressing the culture of the time, however uncomfortable. We know now that the treatment of slaves was ghastly and abhorrent, which allows Schultz and Django to seek deserved vengeance personally, as well as collectively for generations of slaves.

Vengeance is not an uncommon theme in Tarantino’s films, however Django joins Inglourious Basterds in provocatively rewriting the history books for entertainment’s sake. Essentially, nothing is anachronistic and anything goes, much like the Wild West that is the setting for the familiar spaghetti Western genre Tarantino is paying homage to. In this case though, the Wild West is the Old Plantation South, pre-Civil War era, and well before the emancipation proclamation and the 13th US Constitutional Amendment. 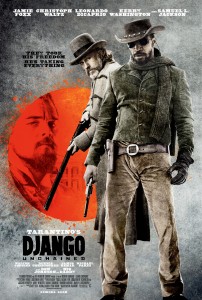 Jamie Foxx and Christoph Waltz make a fine pair blazing across the South, with Foxx balancing Waltz’s wonderful comedic performance with terrific inner turmoil and struggle. Kerry Washington has an ethereal presence when depicted in flashback form, then morphing into a very timid and anxious character when we meet her in real time. Leonardo DiCaprio is disturbing chilling as the Candyland plantation owner. Samuel L. Jackson, however, steals the show with a brilliantly daring show-stealing performance as the house slave Stephen. As wonderful as Waltz is, Jackson is the one deserving of a supporting actor nomination, especially when Dr. Schultz is a leading performance.

Quite a few stars appear in small cameo-type performances including Franco Nero, Bruce Dern, Russ Tamblyn, Tarantino himself sporting an Australian accent alongside John Jarrat, and Jonah Hill in a hilarious scene with Klu Klux Klan members with misshapen hoods.

Music is an unsurprisingly strong, given Tarantino’s history with music in film, and is at its most effectual with the impressive original song written for the film “Freedom” by Anthony Hamilton and Elayna Boynton.

Freedom, justice and equality are themes of the moment with Steven Spielberg’s Lincoln being released in Australia and overseas around the same time. Both are nominees at this year’s Academy Awards for Best Picture. The two are very different films and yet with both have very similar messages against racial intolerance. Django Unchained, however, packs a stronger and more forceful punch with blood trickling down the side of the fist that smacks this spellbinding film into cinemas.

Django Unchained is in Australian cinemas from 24 January through Sony Pictures.