It will have been eight years this year since the Boxing Day Tsunami wreaked havoc throughout South-east Asia triggering an unprecedented global recovery effort. Directed by Spaniard Juan Antonio Bayona (The Orphanage) and based on the true story of a Spanish family’s survival, this is an equally harrowing and uplifting tale of an event we all remember too well but perhaps not so vividly.

This big screen adaptation sees Henry (Ewan McGregor), his wife, Maria (Naomi Watts), and their three sons, Lucas (Tom Holland), Thomas (Samuel Joslin) and Simon (Oaklee Pendergast) anglicised, an odd decision considering this is a Spanish production.  However, there is a good chance this may not have gained traction if not for the marketing power which comes with the pairing of a former Oscar Nominee and Obi-wan Kenobi.

Holidaying in Khao Lak, Thailand, for Christmas, their relaxed escape along with thousands of others’ is cut short when the tsunami arrives on the morning after. Their beach-side resort is pummelled in the torrent and the family, enjoying the pool, is swept up and separated. In the wake of destruction, The Impossible follows their journey to discover what became of each other in the gruelling aftermath. 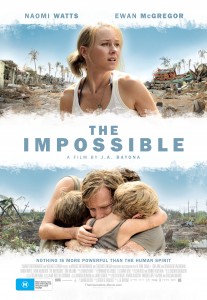 A movie of two halves, the first shows the tsunami as experienced by Lucas and Maria before switching to Henry’s part in the recovery effort and his anxious search. The arrival of the tsunami, obscured from view, is an eerie experience, an unheralded terror announced with shuddering intensity. The buffeting, disorientating and bruising effect it has on Maria and Lucas as they try to reach each other in the piercing current truly puts you in their place and is surely one of the most spectacular sequences of the year.

Watts’ experience in showing extreme pain is some of the strongest after turns in Funny Games and King Kong and is again quite believable, stumbling, wincing, and screaming with wounds agape. McGregor also provides ample support in a poignant role as the tireless husband. However, this film is defined by the performance of Holland as the eldest son Lucas.  Acting well beyond his years in the absence of his father and brothers to take responsibility for not only his mother but the wider community, it is a remarkable transformation.

Though, for all the work that makes staging the tsunami a resounding success in filmmaking, the dramatisation around it is less engaging. The film’s introduction seems pre-occupied with redundantly forecasting doom through unnecessary shudders and jolts on board the plane.  The ending, while no doubt miraculous, has also suffered from over-embellished writing by screenwriter Sergio G. Sanchez where near misses are used to manufacture tension which in the end feels just like manufactured tension. This is one of the dangers of taking on a story where everyone knows the circumstances and the outcome from the start. It would also have been beneficial for the effects on the local population, who are portrayed only in aiding foreigners, to have been elaborated as this account concerns mostly the tourist community.

Regardless of its faults, The Impossible does well in evoking the perpetual shock but also general good will which surrounded one of the worst natural disasters in memory and is a visually impressive rendering of an incredible story.

The Impossible is in Australian Cinemas from February 2013 through Hoyts Distribution.

Written By
Angus Tonkin
More from Angus Tonkin
There are going to be so many opinions flying around regarding the...
Read More