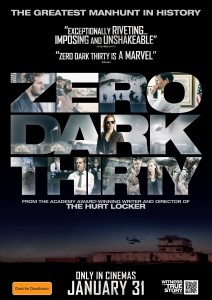 Courtesy of Icon Films, Film Blerg is giving away 5 double passes to see the 5-time Oscar nominated film ZERO DARK THIRTY, from the team that made THE HURT LOCKER, out in cinemas from Thursday 31 January.

Film Synopsis: Zero Dark Thirty is a military term meaning half past midnight – the timing of the actual mission to locate and eliminate the world’s most dangerous man, Osama bin Laden. The term also refers to the secrecy that surrounded the decade long mission to track him down.

Deemed the greatest manhunt in history, ZERO DARK THIRTY chronicles the declassified true story of the relentless pursuit by an elite team of intelligence and military operatives, working in secret across the globe.

Director Kathryn Bigelow reteams with her writer/producer from THE HURT LOCKER to reveal the intricate details behind the gripping chase, culminating with the now infamous raid on May 2, 2011 that ended bin Laden’s reign of terror.