Over ten years in the making, Ang Lee finally brings the big screen adaptation of Yann Martel’s Life of Pi. Pi (Suraj Sharma) is a remarkably bright boy. Changing his name from Pissa as a young child (Gautam Belur playing the 5-year-old Pi, and Ayush Tandon playing the 11-year-old Pi), Pi impresses his classmates and former bullies by reciting the mathematical equation (pi) for hundreds of decimal places. During his adolescence, Pi’s family decide to move from Pondicherry to Canada, taking with them the zoo animals they had amassed during their time in India. But tragedy strikes upon their voyage. As a result, Pi is left to fend for himself in the ocean with a lifeboat as his saviour and one other little thing. Well, not so little, it’s a Bengal tiger that does by the name Richard Parker.

Life of Pi details Pi’s journey of survival, as told by a middle-aged (Irrfan Khan) version of himself to a young Canadian writer (Rafe Spall). The young Suraj Sharma gives a strong performance in a tough role that dominates most of the screen time in the film. The rest of the cast are fine, but really only appear in a small amount of short scenes. The Bengal tiger is the second lead actor in the film, and also performs well, commanding every scene it is in with the appropriate carnivorous, mammal-like qualities.

The relationship formed between Pi and the Bengal tiger was instinctual and at times warm, but did not disturb the order of human and predatory mammal. Minimal tenderness in the relationship was touching, and thankfully did not become sentimental like the relationship between Christian the Lion and his tamers (sidenote: the memory of the YouTube clip came to mind several times throughout the screening.) Survival is, of course however, the name of the game, and several scenes see the animal kingdom hierarchy order in full swing. Two other animals also make it onto the lifeboat, but without giving too much away, survival of the fittest reigns supreme. Though the violence is not strong, viewers with a weak constitution for animals attacking each other should still be wary. 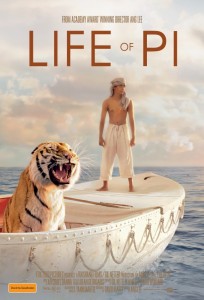 Religion plays a large but disjointed part in the film, where Pi discovers different faiths before the voyage, and questions God in the aftermath of the incident. Pi articulates that his fear of the Bengal tiger kept him alive, giving his life purpose. This alone serves as an explanation for faith in a higher power. The film, however, portrays a more traditional idea of the all-knowing heavenly Creator, whose influence and control is mysterious, enigmatic but all part of a grand plan.

Claudio Miranda’s cinematography draws instant comparisons to the work of Eduardo Serra in What Dreams May Come and Andrew Lesnie in The Lovely Bones. The bright hues of the sunrise skyline and crystalline clear images of water all absorb the viewer with much beauty, also putting the 3D technology to good use. Mychael Danna’s score is also particularly exception, allowing the cinematic elements to come together alongside the powerful visual and sound effects.

With a strong screenplay written by David Magee, Life of Pi serves as a visually beautiful story of courage and survival. Belonging to the club of countless coming-of-age stories while adrift in a foreign land or unknown landscape (or sea in this case), Lee’s adaptation is engaging, but not flawless. The connection to religion is not sufficiently explained, and the remaining ambiguities lead to a rather dissatisfying conclusion. All in all, Life of Pi is still an enjoyable film to see this holiday season.

Life of Pi is in Australian cinemas from Tuesday 1st January through 20th Century Fox.

Written By
James Madden
More from James Madden
Each story has two sides, if not many more. This old adage...
Read More