Grandparenting is a second chance at parenting, knowing the mistakes made the first time around. Well, that’s what sixty-something Diane Decker (Bette Midler) says to her husband Artie (Billy Crystal) when travelling to babysit their grandchildren.

The Deckers have lately played an absent role in their daughter Alice’s (Marisa Tomei) life. A disconnect lies between parents and daughter, evidenced by Alice’s reticence and visible rash upon their mention. Cast as last-resort babysitters, the Deckers appear and mayhem ensues.

Parental Guidance is a film with many relatable themes to an audience of parents and adult children. Much of these themes come with a generational perspective. Alice’s modern “use your words/never say no” style of parenting is in direct contrast to the brisk and abrupt style that the Deckers used. Both styles of parenting have their shortcomings, but it is the modern style that is seen as less effective (at least when Artie and Diane try to abide by it.) 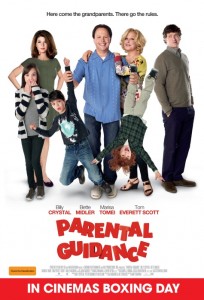 Numerous situations are presented to question these new parenting styles, allowing for the relationship between Alice and Artie come into question. Though Artie and Diane are not perfect, ultimately their wisdom and straight-talking is seen as a successful antidote to behavioural or communication problems with the grandchildren. Parental Guidance even goes as far as symbolically baptising Artie, Diane and the three grandchildren in a rain sequence as they play kick-the-can.

Both Billy Crystal and Bette Midler are very fun in their roles as Artie and Diane, having had too long an absence from the screen. Megastars in the 80s and 90s, Crystal and Midler are a treat to see, and are convincing as an old married couple, not having lost their wit nor their flair to deliver a punch line. Both also handle more emotional scenes well without overdoing it.

Marisa Tomei is enjoyable too, displaying her obvious capacity for comedic roles (with a strong ability for physical comedy.) The kids (played by Bailee Madison, Joshua Rush and Kyle Harrison Breitkopf) are funny and give solid performances with special kudos to the very cute Breitkopf.

Parental Guidance presents a friendly and rather innocent take on an existing social commentary: different parenting styles. As a feel-good Christmas film, Parental Guidance begins with shtick and surprises in the final act with some moving (and of course schmaltzy) scenes thanks to a good script from Lisa Addario and Joe Syracuse and thoughtful direction from Andy Fickerman.

Parental Guidance is in Australian cinemas from Wednesday 26 December through 20th Century Fox.