Imagine, just for a moment, a world where mythological figures such as Santa Claus, the Easter Bunny, the Tooth Fairy and the Sandman all co-existed. In addition to this, these individuals are collectively united in a ragtag vigilante group, called the Guardians, defending children around the world from existential threats to their everlasting happiness and wonder.

This forms the intriguing basis of Rise of the Guardians, the latest effort from Dreamworks Animation, based on a series of novels by writer William Joyce. Released just in time for the holiday season, the film treads a fine line between being a pedestrian family crowd pleaser, and at the same time, wanting to flesh out the possibilities of a universe where all the aforementioned folk characters (and many more) live and interact with one another.

The Guardians find themselves called into action again when the Bogeyman (voiced by Jude Law) returns following a long absence, wanting to terrorise  children and be feared as he once was in the past. An invisible Jack Frost (Chris Pine) wanders the world isolated and alone since nobody believes in him anymore, until a set of circumstances arises where he is enlisted by the Guardians in the fight against their current villain. 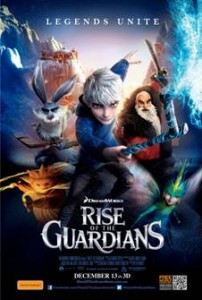 In addition to Law and Pine, the voice over talent also features other noteworthy stars including Alec Baldwin, Hugh Jackman and Isla Fisher. Baldwin is amusing in his take on Santa as an aggressive and slightly unhinged individual, topped off with a Slavic accent. Jackman is less impressive as the Easter Bunny. The character’s exaggerated Australian persona is grating at times, although it’s easy to imagine this might not be the case for international audiences. On the animation front, Rise of The Guardians certainly delivers. From beginning to end, the film is packed with one beautifully rendered sequence after another, with the 3D version providing a particularly immersive experience for viewers.

Like many other films in this genre though, its self-conscious awareness that children are going to be the primary audience results in a hyperactive and unsatisfying dash from one point plot to another. Both Pixar and Studio Ghibli have demonstrated in the past that family friendly animated films need not be uncompromisingly manic affairs to hold the attention of children and parents alike. One could have hoped that the filmmakers in this case could have been reminded of this fact.

It may fail to entirely live up to the possibilities of its premise, but Rise of The Guardians should be a perfectly adequate festive season film choice for families or the young at heart.

Rise of the Guardians is in Australian cinemas from Thursday 13 December through Dreamworks Studios.