So long as movie-going remains a popular date activity, filmmakers will continue to churn out romantic comedies. While this may be good news for new couples, film buffs are less likely to find this exciting. Indeed, critical viewers tend not to be satisfied by your archetype boy-meets-girl narrative; often they’ll only be impressed if given an additional plot element.

Sophie Lellouche’s Paris-Manhattan tries its best to find that extra ingredient. It attempts to remove itself from the rom-com genre by invoking the master of watchable love stories – Woody Allen. The film’s tributes to him begin with the title credits, and end with a memorable final scene. In between these two bookends are countless references to the Jewish American screen legend in an original screenplay that should please his fans.

Protagonist Alice (Alice Taglioni) is the worst kind of Allen diehard. As a pharmacist, she prescribes Allen’s films to her customers. As a party guest, she argues with socialites about the quality of Allen’s work. Alice’s worst habit, however, is seeking life advice from an Allen poster in her bedroom. The inanimate Allen is her unfailing source of wisdom, contributing quirky anecdotes without ever moving from his still-frame pose. 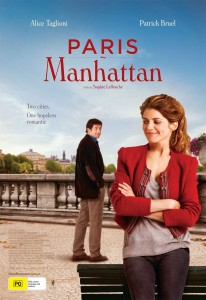 The final outcome – regarding which guy gets the girl – is never in doubt. The one-dimensional Vincent (Yannick Soulier), one of Alice’s love interests, is barely given an introduction. The filmmakers decline to explore his persona, leaving him as little more than momentary eye candy. It doesn’t take a spoiler to realise he doesn’t play a central role in the film’s finale. In his place is Victor (Patrick Bruel), a charming alarm-salesman who keeps appearing in the right place at the right time.

As such, Paris-Manhattan’s appeal is found not so much in the romance, but the subplot. Characters such as Alice, Victor, and Vincent are a dime a dozen. But Woody Allen is a one of a kind; even the illusion of his presence is more potent than the sentient players who share the screen.

At its heart, Paris-Manhattan is as soppy as chick flicks come. In many ways, it doesn’t venture far from the classic love story narrative arc. Lellouche nevertheless deserves some credit for her creativity and alternative approach. In disguising her rom-com as an innovative indie picture, she succeeds in engaging both sensitive and critical audiences. And, if all else fails, at least she’ll appease some of the Woody Allen fanatics out there.

Paris-Manhattan is in Australian cinemas from Thursday 13 December through Palace Films.

Written By
Kevin Hawkins
More from Kevin Hawkins
In the aftermath of Nelson Mandela’s death on 5 December 2013, most...
Read More