I wanted to write to you because you wrote that book I love so much and then you wrote and directed the film adaptation even though I’m sure lots of other people would have wanted to. I just wanted to say thank you for making your book into a film and not letting any Hollywood scabs get their filthy mits on it.

You express the true and real angst of being a teenager without making it corny or unjustified. You make beauty out of mundane situations and you write characters so three-dimensional that I feel their pain as if it were my own. Somehow you see the unseen moments in life, unappreciated by all others before you. Not since John Marsden unexplainably captured the pain of being a girl in the throws of youth has someone so captured the true nature of growing up with first world problems and truly understanding how someone can be sad and happy at the same time. 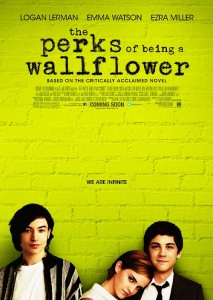 The Perks of Being a Wallflower felt like cramming all the seminal experiences of high school in to one hour and forty-two minutes. It hurts but it will make you want to laugh. Emma Watson‘s accent is not distracting like it probably should be and she truly has shaken off the shackles of the “he who must not be named” saga. Ezra Miller was enchanting and flawed (and in no way resembled a serial killer) as only true character actors can be. And old Percy Jackson lightning thief Logan Lerman was the perfect embodiment of every misfit who ever watch from behind a book as the rest of the kids had their dances and their parties and their drama and their fun.

This is what life looks like from the inside kid, and it is infinite.

The Perks of Being a Wallflower is in Australian cinemas from Thursday 29 November through Roadshow Films.