There’s a scene halfway through Vicky Cristina Barcelona where the narrator elaborates on the thoughts of the American Christina while spending time in Barcelona:

“She was already thinking of herself as a kind of ex-patriot, not smothered by what she believed to be America’s puritanical and materialistic culture which she had little patience for. She saw herself more a European soul, in tune with the thinkers and artists she felt expressed her tragic, romantic free-thinking view of life”.

In this, the third of his European films made outside his beloved New York, it becomes fascinating to wonder first if Woody Allen could, in his description of Christina, be interpreted as discussing himself during this period, and secondly, if the move is what led to a remarkable rejuvenation from what had become a stale patch in his career with a series of films that ranged from the merely disappointing (Melinda and Melinda) to the downright terrible (Anything Else). Regardless of what the answers may be, the latest period in Allen’s filmography has led to some exceptionally good films, of which Vicky Christina Barcelona is still perhaps the best.

Spending the summer abroad, the film follows the adventures of best friends Vicky (Rebecca Hall), a neurotic, overly serious woman who’s engaged to a businessman in New York, and Cristina (Scarlett Johansson), a ditzy, less mature girl who’s looking to find her place in the world. The film follows the two of them, as they explore Spain and navigate their mutual attraction to the romantic painter Juan Antonio (Javier Bardem), who in one of the film’s most amusing moments, proposes a ménage à trois on their first meeting. First with Vicky and then with Cristina, Juan Antonio romances them both before halfway through the film his suicidal, crazy ex-wife Maria Elena (Penelope Cruz) shows up and complicates their relationships. Like a lot of Allen’s best character pieces, such as the dramatic Interiors or the comedic A Midsummer Night’s Sex Comedy, the film functions very much like a play with a minimal cast and some of Allen’s most perceptive and humorous writing. 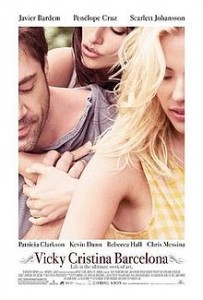 The four leads in the film are absolutely perfect. Naive, confident, and perpetually confused, there is a serious argument to be made for Scarlett Johansson to be considered one of the best, if not most well cast, of Allen’s leading ladies (second of course to Diane Keaton). Rebecca Hall is good, if over shadowed, as the female substitute for the Woody Allen persona. Javier Bardem and Penelope Cruz are both spectacular in the film, trading Allen’s witty barbs at a lightening pace and alternating effortlessly between English and Spanish.

The film is beautifully shot in the warm golden hues of Spain and is made with a deceptive simplicity by Allen, the camera often hand held or finding the heart of the scene by roving across it. The Spanish setting and casting of Penelope Cruz evoke the combination of warmth and spirit of Pedro Almodóvar, but the story and characters are pure Allen. The whimsical tone of the film is perfect in effectively creating a mythical Barcelona where these characters with a typical Allen skewed morality, that often seem at odds with the world he places them in (such as in Shadows and Fog) can not only exist but thrive.

Though it might lack the brilliant originality of his early work like Annie Hall or the dramatic richness of something like Crimes and Misdemeanours, and while it may not be Allen’s greatest film, Vicky Cristina Barcelona in its warmth and simplicity is something most films just aren’t, perfectly executed, and that is something that should be appreciated in itself.

Written By
Chris Smith
More from Chris Smith
Following his theatrical film debut as director a decade ago with the...
Read More