Watching Zal Batmanglij’s debut film Sound of My Voice feels a bit like putting together an incomplete jigsaw puzzle. Assembling the edge pieces is pretty straightforward, but the colourful bits are all missing, leaving the completed image to remain ambiguous. It’s hard to say whether this is the result of lazy filmmaking or cinematic genius. On first judgement, I’m tempted to say it’s a bit of both.

Sound of My Voice is the fictional story of two documentary filmmakers (Christopher Denham and Nicole Vicius), who join the inner sanctum of a cult in order to order to gain an insider’s perspective. They know the cult’s leader Maggie (Brit Marling; also co-screenwriter) is a fraud. But one by one, strange occurrences suggest otherwise. 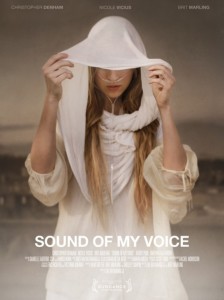 Unlike the other cult-inspired film in cinemas at the moment – Paul Thomas Anderson’s The Master – Sound of My Voice is easy to follow. It is gripping and suspenseful from start to finish, building up to one climax after another. Batmanglij has a habit of cutting scenes off at their peak, however this only leaves the audience wanting more.

All three leads deliver strong performances. It’s easy for audience members to step into the shoes of Denham and Vicius, both of whom are believable in their regular shifts between cynicism, bewilderment, and defensiveness. Meanwhile, Marling’s assured stage presence yet ethereal nature makes her a fitting choice to play Maggie.

While the film never quite make a clear step into sci-fi territory, it regularly flirts with the idea. In doing so, Sound of My Voice challenges its viewers to re-think their conceptions of truth, deceit, and faith. Furthermore, it invites one to question their understanding of the material universe, and whether the impossible could indeed be possible.

Without giving too much away, the film’s biggest flaw is that it delivers few – if any – answers; the audience is unlikely to leave the cinema completely satisfied. Indeed, the film’s Inception-like conclusion may well have punters dedicating considerable amounts of web space to formulating complex explanatory theories.

However, it is during this reflecting and re-watching process that Sound of My Voice finds its real potency. While the answers still fail to reveal themselves, the confusion of the initial screening is slowly replaced with a sense of appreciation. It is then that you realise that Batmanglij isn’t lazy after all – he may well be a genius.

Sound of my Voice opens exclusively at Cinema Nova on Thursday 22 November through Fox Searchlight Pictures.