With the benefit of hindsight, it’s now clear that Match Point marked a turning point of sorts in Woody Allen’s long and winding career. Notably, Allen left behind his much loved city of New York to produce and film the project in London, with Match Point becoming the first of a series of films in recent years to be set in a major European city.

At the very least, it provided a much needed boost to the director’s public profile, since it was arguably the first film of his to receive significant interest from the broader public in well over a decade. Regular readers of Wednesday’s with Woody would know that while devoted Allen fans hold a number of his mid to late 90s work in high regard, his prominence within general popular culture had been in decline during this same time. The buzz surrounding the film following its premiere at Cannes in 2005, when combined with a equally enthusiastic response from critics, resulted in Match Point becoming a major box office success. To the surprise of many, Allen was seemingly a bankable prospect once again, even as he approached the age of 70.

The film falls firmly into the straight drama end of spectrum of Allen’s output, barring the odd characteristic wry aside from time to time. Jonathan Rhys Meyers stars as a country club tennis coach from humble beginnings who eventually befriends a wealthy client (Matthew Goode), and begins to date his sister (Emily Mortimer). This turn of events sees him gain access to a previously unattainable life of privilege, which is seriously threatened once he begins to pursue a relationship with his new friend’s fiancee, a sultry American actress played by Scarlett Johansson. 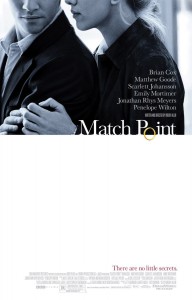 Exploring notions of morality, luck and class, Match Point in many ways treads well worn thematic territory for the director. Where it distinguishes itself as a later career highlight is the careful craftsmanship and attention to detail Allen brought to proceedings, in contrast to the slapdash nature of preceding films such as Anything Else and Melinda and Melinda. The shift in locale proved to be a source of creative inspiration for Allen, who handles the material with a sure-handedness and confidence that had not been present for some time. Arguably, the film’s first half slightly overstays its welcome in setting all the pieces in place, which is unusual given the director’s preference for narrative efficiency. Without revealing too much, audiences are duly rewarded with a gripping second hour as Match Point’s protagonist makes a series of fateful decisions, the consequences of which ultimately lead to a haunting and troubling conclusion.

Following the success of Match Point, Allen would return to its basic ingredients a number of times in subsequent projects by casting recognisable actors in non-American locales, with varying results. More than anything else, Match Point served as a reminder that Woody Allen was still a filmmaker capable of producing vital work which could appeal to those outside of his established fan base. Given the even larger triumphs of Vicky Cristina Barcelona and Midnight in Paris, apparently Allen himself came to the realisation that there was an international audience out there waiting to fall in love with him all over again.

Written By
James Zarucky
More from James Zarucky
Making its away across the international festival circuit in 2012, the initial...
Read More