Whatever you may think of the final product, it’s certainly hard to deny that Woody Allen’s 2004 film Melinda and Melinda contains one of the director’s most intriguing premises for a film. It opens with a group of writers debating whether the essence of life is inherently comedic or tragic. To illustrate their points, two writers on opposing sides of the argument proceed to fashion the story of a neurotic woman unexpectedly showing up at a dinner party into both a comedy and a drama. The film then proceeds to cut between the dinner table argument and both versions of the story unfolding in parallel to one another, ostensibly allowing audiences to reach their own conclusions about the film’s central conceit.

Despite Allen being entrenched in a fallow period at this point in his career, both critically and commercially, he still manages to assemble a formidable and talented cast for Melinda and Melinda. Australia’s own Radha Mitchell does the heavy lifting playing the character of Melinda across the complementary storylines, shifting from a quirky free-spirit in the comedy to a morose and bitter woman for the dramatic segment. Allen reportedly wrote the role with Winona Ryder in mind, but her arrest for shoplifting near the start of the film’s production meant he had to reconsider, since this presented a significant challenge in finalising financial backing for the project. Chloë Sevigny and Chiwetel Ejiofor star alongside Mitchell in the tragedy, while the comedy features Will Ferrell, Amanda Peet and a very small appearance from Steve Carell, who was only just beginning his ascent to Hollywood superstardom at the time. 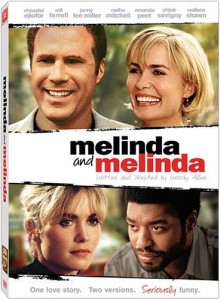 Given the combination of its strong cast, a bold script concept, and a writer/director with established credentials in both drama and comedy, one can only initially wonder how Melinda and Melinda manages to be the mediocre and disposable film that it is. Allen fails to offer much in the way of any meaningful insights by juxtaposing these two genres side by side, nor does he reach any profound revelation in response to the film’s basic dilemma. Perhaps its biggest flaw is that neither of the two narrative threads are particularly good examples of their respective genres: the tragedy is lacking in emotional resonance, while the comedy fails to offer much more than mild amusement.

If anything, the film appears to fall victim to Allen’s assembly line approach to filmmaking, its premise serving as nothing more than a convenient narrative device to jettison two underdeveloped script ideas. As a result, otherwise talented actors are saddled with stiff dialogue, which when combined with the rushed production timeframe, gives rise to overly broad and mannered performances all round. Only Ejiofor, and to a lesser extent Ferrell, emerge completely unscathed in rising above the pedestrian nature of the material with which they had to work with.

It goes without saying that Allen will be remembered as one of the great American auteurs of all time, but his insistence in producing on average a film a year does mean that his body of work is an uneven one. For every cinematic classic, there are just as many throwaway moments and failed experiments along the lines of Melinda and Melinda.