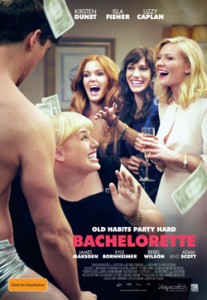 Courtesy of Hopscotch Films, Film Blerg is giving away 3 double passes to see Kirsten Dunst, Isla Fisher, Lizzy Caplan and Rebel Wilson in BACHELORETTE out in cinemas from Thurs 1 November.

Film Synopsis: A group of best friends since high school reunite in Manhattan for the wedding of their pal Becky (Wilson), who they cruelly nickname Pig Face. There’s the competitive, Princeton-grad ice-queen Regan (Dunst), who begrudgingly accepts her role as maid of honour despite her horror that her less-attractive friend is getting married before her; cynical wild-child Gena (Caplan), who’s determined to confront her high school ex who broke her heart; and the ditzy Katie (Fisher), who is all bubbly exterior until you scratch the surface.

The single ladies are determined to put their bitterness aside and have an awesomely hedonistic bachelorette party. Armed with razor-sharp insults, a free spirit for fun and a pack of groomsmen, these modern femmes (or mean girls!) embark on one very long and emotional night of misadventure. Bachelorette is the debut feature by writer/director Leslye Headland and is a sassy, funny and sometimes romantic ride that never forgets to celebrate the complexities of female friendship.

Written By
Film Blerg
More from Film Blerg
Head on over to our Facebook page to win free tickets to...
Read More