Anything Else tells the story of Jerry Faulk (Jason Biggs), a frustrated New York writer who scribbles one-liners for nightclub comedians while dreaming of becoming a great nihilistic author. Like all male leads in Woody Allen’s universe, Jerry Faulk is made of that familiar cocktail of one part co-dependency, a splash of monophobia and that single, all important of mixers, the crippling fear of death. Faulk also has an unhealthy garnish of being too nice. In fact, he’s terminally nice; he’s tied by guilt to long-time book agent Harvey Wexler (Danny DeVito), who speaks only speaks in metaphors relating to tailoring and extorts a whopping 25% of all his earnings; he’s also held hostage by the world’s worst girlfriend, Amanda (Christina Ricci), who been uninterested in sex for months and has coerced Faulk to let her incongruous mother, Paula (Stockard Channing), live with them in their tiny one-bedroom apartment.

The only beacon offering insight into his life – and life at large for that matter – is David Dobel (Woody Allen), a paranoid sixty-year-old school teacher, would-be comedy writer, obsessed with building an end-of-the-world survival kit who, without being asked, takes the young Faulk under his overly wordy wing. Much of the film revolves around Jerry and Amanda’s relationship and his debriefing conversations with Dobel in Central Park. 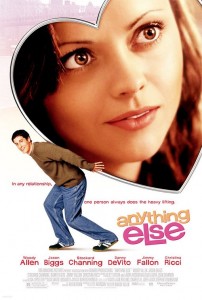 There’s something extremely familiar about Anything Else. Even without having watched it before, one gets an odd feeling of déjà vu. The locations, set design, soundtrack and, of course, that impeccable Allen dialogue, all have a feeling of odd familiarity about them. Of course, many of Allen’s films have traces in them from early years: Match Point retreads similar themes as Crimes and Misdemeanors, while Midnight in Paris recaptures the same sense of nostalgia found in The Purple Rose of Cairo, but Anything Else is markedly different from these reinventions. It is perhaps because the film feels like it’s is trying to recapture everything about a Woody Allen movie that makes it distinctly a Woody Allen movie, retreading a well-worn path so to speak, which leaves the viewer feeling as though their watching something they’ve seen countless times before.

Thematically the film is closest to Annie Hall, both films begin with a monologue joke and focus on the ups-and-downs of a single relationship, while the characters of Alvy Singer, Jerry Faulk and David Dobel are all seemingly versions of the Allen persona, sharing the same view that the ills of living are best eased through telling jokes.

Like many of Allen’s films the supporting cast members are sublime, Danny DeVito is terrific as the weasel-like manager with a predilection for well-made suits, while Stockard Channing manages to condense a performance worthy of a whole movie into a few short scenes. The production value is also second-to-none. Allen again employed Santo Loquato for the production design and hired Darius Knondji (famed for The City of the Lost Children and Se7en) to shoot this film and the Persian cinematographer manages to capture some stunning images of New York and Central Park alike.

As for the leads themselves they are sadly little more than flat together, disappointing given the elements of what would normally be a great Woody Allen picture. Christina Ricci gives a fine performance as the self-absorbed Amanda, while Biggs does little more than impersonate Allen, seemingly never making the character his own. The story goes that Allen felt too old to play Faulk and instead cast Biggs. Despite one terrific scene with Ricci where she admits to sleeping with her acting teacher for his benefit, Biggs is mostly outclassed. This is none more apparent than in his scenes with Dobel, where Allen’s pithy dialogue is showcased in flying form against pale imitation. Overall, there are elements to Anything Else that on their own are undeniably funny, beautiful to look at and well executed, but as a whole they unfortunately fail to add up.

Written By
Mark Hewitt
More from Mark Hewitt
Being a Woody Allen fan is a little like being a gambling...
Read More