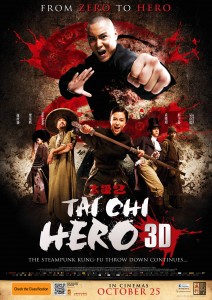 Courtesy of Icon Films, Film Blerg is giving away 10 double passes to see TAI CHI HERO, the second film in the TAI CHI TRILOGY, out in cinemas from Thurs 25 October.

Film Synopsis: TAI CHI HERO 3D is the second installment of the TAI CHI trilogy . We continue to follow Yang Luchan’s journey to learn the art of Tai Chi, although things don’t go as planned when a frightening army of steampunk soldiers bearing strange machines show up. Again, the villagers realize that in order to save their homes, they must trust Yang Luchan with the ancient and powerful knowledge of Tai Chi. TAI CHI HERO 3D releases in cinemas October 25.