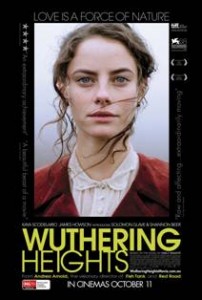 Having steered clear of the Brontë sisters since a rather unfortunate turn at studying Jane Eyre in year 11 literature I thought a bright new interpretation of one of their many depressingly realistic novels would be the way to get my eerie gothic groove back. But I was wrong.

There’s something about slow, quiet, moody films that heavily showcase the melancholy English moors in all their dreary, foggy splendour that just kills me. Andrea Arnold‘s take on the Emily Brontë classic was fresh and daring, particularly taking cues from many literary scholars and casting a black Heathcliff (James Howson), but by jove was it BORING!!! There, I said it. Wuthering Heights was boring.

The character development was subtle and there were definite supernatural undertones even though the whole post death dream sequence was cut out. Most importantly, I just did not believe the motivations of the characters. Cathy (Kaya Scodelario) was insufferably selfish and the fact that Heathcliff would go off and work and work and make something of himself only to come back and court the woman who abandoned him in order to hang with the toff’s just didn’t sit right with me.

The karmic retribution handed to Hindley (Lee Shaw) was a real fist pumping turn of events although I felt his disassociation from events really worked against the flow of the story. Heathcliff was stoically antagonistic and the women either abused their sexuality or were ridiculously stupid, and goddamn those freakin’ moors.

Despite being troubled by the pacing of Charlotte Brontë‘s Jane Eyre, the bold feminism it displayed was admirable. Arnold’s take on Wuthering Heights however, cured me of ever wanting to pursue Victorian gothic fiction ever again.

Wuthering Heights is in Australian cinemas from Thurs 11 October through Transmission Films.