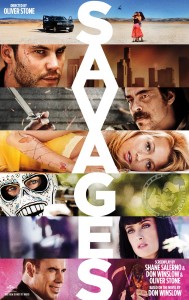 Synopsis: Three-time Oscar®-winning filmmaker Oliver Stone returns to the screen with an all-star ensemble for the scorching thriller Savages, based on the best-selling crime novel by Don Winslow, which was named one of The New York Times‘ Top 10 Books of 2010. Blake Lively stars as Ophelia, the girlfriend to two Laguna Beach entrepreneurs, one an ex-mercenary (Taylor Kitsch) and the other a principled environmentalist (Aaron Johnson), who‘ve built a thriving homegrown industry on the best marijuana ever developed. When they refuse to sell their business to a brutal Mexican drug cartel, Ophelia is kidnapped, and so begins an escalating series of ploys with savage consequences. Filling out the stellar cast are Benicio Del Toro, Salma Hayek, John Travolta, Uma Thurman and Emile Hirsch.