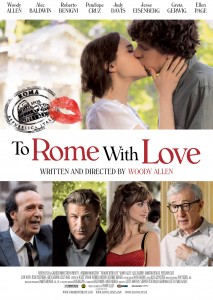 Courtesy of Hopscotch Films, Film Blerg is giving away 3 double passes to see Woody Allen’s newie TO ROME WITH LOVE, in cinemas from Thurs 18 October.

Film Synopsis: Doing for Rome what Woody Allen did for Barcelona in Vicky Cristina Barcelona and Paris in Midnight In Paris, comes To Rome With Love. Full or romance and comedy, and starring another fine ensemble cast of great actors, To Rome With Love follows four different storylines of characters in Italy – some American, some Italian, some residents and other visitors – and the adventures and predicaments they find themselves in.

Last year’s Midnight in Paris marked Woody Allen’s 41st film as director – and became his most successful film release ever, garnering both critical acclaim (and an Academy Award) and smashing box-office records. He promises more audience-pleasing playfulness and a superb ode to the Eternal City with To Rome With Love.