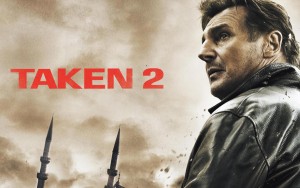 Taken 2 was bound to suffer in the shadow of Taken as so many cinematic abortions had heeded the success of the 2010 action odyssey, with an unashamed resemblance. These films will be omitted from this discussion in the interests of good taste. For some reason (MONEY!) Luc Besson felt it necessary to produce an authentic (it has the word “taken” in the title) second chapter in the drama of ex-CIA agent Bryan Mills’ hectic existence. Liam Neeson is joined by all relevant members of Taken’s cast in the sequel, though, as demonstrated by the first film, no one is relevant or competent at anything except ex-CIA agent Bryan Mills.

This time around Mills is taken, along with his ex-wife, in the interests of revenge – a far fetched and back-story emerges from his daughter’s rescue, it appears the film had no way of escaping itself – this pathetic premise is nothing short of a “long-lost twin” or “down under” follow up.  American family visit Istanbul, are kidnapped by Albanians (who are sex-traffickers) that are protected by corrupt Turkish police and, naturally, the only Americans in what is a hugely popular tourist destination – cuts through culture like a missile. 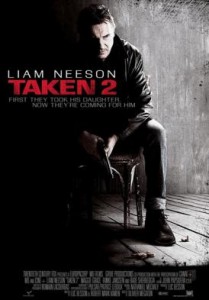 The film’s liability is not the awful fight choreography that looks like its shot by a malfunctioning cartoon robot, and it’s not the tedious book-end sequences about getting a driver’s license, and it isn’t even Mills’ ridiculous capacity to calculate distance by listening to grenades. The xenophobic subtext of the first film is amplified to the point that it isn’t subtext at all. Mills’ apprehensions about his daughter’s boyfriend are confirmed when he finds an exotic-looking guy living in what appears to be total darkness (you can bet that the third film will see the newly weds in his home village of – some North African country? – kidnapped and tortured by the fascist flavour of the month).

The portrait of Istanbul (its important to recognise that Istanbul is no way associated with Turkey) is of a sun-soaked ancient metropolis with decadent palaces – but we only receive this view from a hotel balcony high above. On the street it’s a bustle of narrow lanes, smoke, dead ends and Islamic women – so let’s get on the roof and throw some grenades.

The importance of family (as proud men see it) seems a hollow ethos considering how excruciating the peaceful scenes in the United States are and how incapable Mills is of sympathising with the idea of family in any other cultures. If you loved Taken, you should be alienated and upset by this film, particularly its ending, which is very confusing and I should mention that the action sequences have none of the cowboy antics of the first. Even racist movie-goers will be bored.