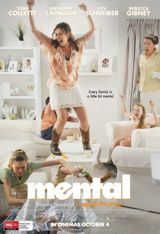 Synopsis: The Moochmore girls are certain they all suffer from some kind of undiagnosed mental illness – because if they’re not crazy then they’re just unpopular. Their mother Shirley – unable to cope with her demanding daughters and unsupported by her philandering politician husband, Barry – suffers a nervous breakdown. After Barry commits his wife to a mental hospital (telling his constituents that “she’s on holiday”) he finds himself alone with 5 teenage girls he barely knows. Desperate, he impulsively picks up a hitchhiker named Shaz and installs her in his home as nanny to his daughters.

Written By
Film Blerg
More from Film Blerg
Synopsis: A terrifying and emotional story based on one family’s experience of...
Read More