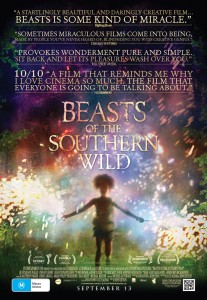 So when a hundred year storm raises the waters around her town, her daddy is suddenly stricken with illness, and fierce pre-historic creatures awaken from their frozen graves to come charging across the planet, Hushpuppy sees the natural order of everything she holds dear collapsing around her. Desperate to repair the structure of her world in order to save her ailing father and sinking home, this tiny hero must learn to survive an unstoppable catastrophe of epic proportions.

Written By
Film Blerg
More from Film Blerg
Each year we are happy to compile our collective lists of what...
Read More