It is May 1945. Peter, an SS officer, is taken into allied custody followed by his wife, Asta, leaving Lore, their eldest daughter, to take her younger brothers and sister to their grandmother in Hamburg. There are no trains running, so they set out on foot across a divided and desolate post-war Germany. The children are soon joined by Thomas, a Jewish survivor, and in him they find a protector and provider whom Lore is both repelled and attracted by.

Lore and her siblings, at first full of music and playfulness, become subdued by temporal dislocation, faced with the aftermath of war, dead bodies, homes in disrepair, citizens in humiliating refuge. Shortland has channeled Elem Klimov’s 1985 war masterpiece Come And See, as the violence and disruption of innocence unfolds as new danger meets them in the mystic spring-fresh green forestry, wet with new beginning. 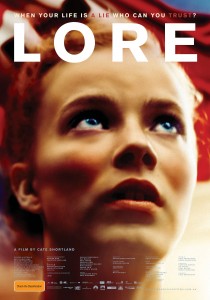 The title suggests the picture’s folkloric quality, its distance from its own harsh reality and the intense bond between myth and morality. Name and identity are the most significant and therefore vulnerable agitators of the beliefs instilled in Lore and Thomas’ and how it effects what becomes a burgeoning, inharmonious affair, is an ambiguous and challenging experience.

Kai Peter Malina, as Thomas, is difficult to connect with – all horror is written on his face, his dark eyes a reflection in which Lore is faced with the human manifest of all her hate, guilt and confusion. Saskia Rosendahl exquisitely captures Lore’s bewilderment with budding sexuality, the truth of her parent’s crimes, the burden of adoptive parenthood and her lonely repression of all these concerns in the interests of survival. Her incredible beauty is used to signify her enduring spirit but behind her poster-child visage, is felt the falseness and cruelty of such superficial worship.

Max Richter’s remarkable, German-inspired original score, which is both harrowing and virtuous, is ornately complimented by Adam Arkapaw’s mix of dream-like framing and documentary-style coverage of ruin. Both music and film played a large part in holocaust history, from a propaganda perspective, to documentation, to all film’s made about it since – it has a history of its own and Lore manages to evoke all of it, which is a testament to Shortland’s knowledge of her profound subject matter. She has truly outdone herself. Lore is near perfect.

Lore is in Australian cinemas from 20 September through Transmission Films.