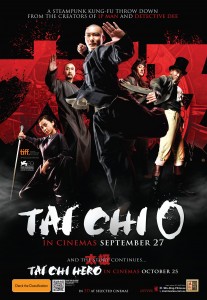 Courtesy of Icon Films, Film Blerg is giving away 5 double passes to TAI CHI 0,  in cinemas from Thurs 27 September.

Check out Wu Xing Filmshttp://www.facebook.com/WuXingFilms on Facebook for all the latest news, featurettes and pics from Wu Xing Films.

As told in TAI CHI 0 (opening 27th September 2012), TAI CHI HERO (opening 25th October 2012) and the upcoming final chapter of the trilogy (coming in 2013), this saga tells the story of Yang Luchan, a young genius who, tired of being picked on, travels to Chen Village to learn the art of Tai Chi. Luchan finds out the hard way that it is forbidden for a villager to teach an outsider when the villagers, from strong men to old women to little children, repeatedly challenge him to a series of fights, all of which he loses quite badly. But when a frightening army of steampunk soldiers bearing strange machines shows up, the villagers realise that in order to save their home, they must trust this strange outsider with the ancient and powerful knowledge of Tai Chi.