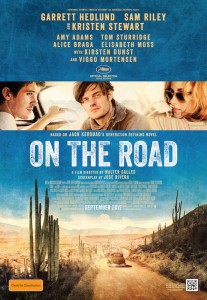 Courtesy of Icon Films, Film Blerg is giving away 5 double passes to ON THE ROAD, in cinemas from Thurs 27 September.

Film Synopsis:  The defining story of the Beat Generation is now on film. Showcasing an A-list and eclectic cast, ON THE ROAD is based on the seminal beatnik novel by Jack Kerouac, about a young man who sets out to travel the roads and railways of America.

After the death of his father, Sal Paradise (Sam Riley), an aspiring New York writer, meets Dean Moriarty (Garrett Hedlund), a wild and infectiously charismatic ex-con. They hit it off immediately. Determined to avoid the pitfalls of a narrow, prescribed life, Sal hits the road, joining Dean on what evolves into a life-changing physical and emotional odyssey. Thirsting for freedom, they discover the world, the ecstasy of experience, the connectedness of humanity and ultimately themselves.

Written By
Film Blerg
More from Film Blerg
Welcome to WordPress. This is your first post. Edit or delete it,...
Read More